'My Name is Pauli Murray': A Durham-made icon finally gets her due on film 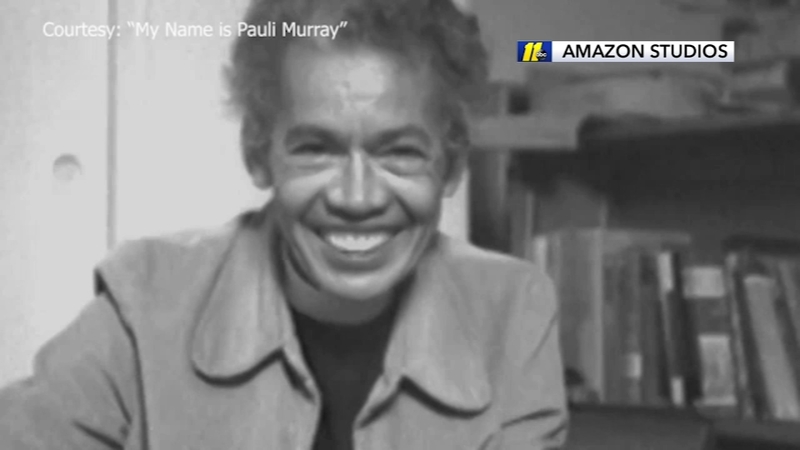 'My Name is Pauli Murray': A Durham-made icon gets her due on film

DURHAM, N.C. (WTVD) -- Durham's own Pauli Murray died 35 years ago but it's really within the past 10 years that her name and her monumental achievements for civil rights have become more well-known.

Friday night at the Carolina Theater in Durham, Murray's name was on the marquee. Historians hope a new documentary puts Murray's legacy on the pedestal it deserves.

Murray was so many things -- a lawyer, a priest, a poet, a Durhamite. Now, her amazing life is a movie: "My Name is Pauli Murray," released by Amazon Studios.

It premiered in select theaters Friday night, including here at Durham's Carolina Theater in Murray's hometown. ABC11 spoke about the movie with Murray's niece, Rosita Stevens-Holsey and Barbara Lau, director of the Pauli Murray Center for History and Social Justice.

Lau spoke to the historic figure Murray was -- whose history was, for so long, hidden in plain sight.

"Many people have never heard of Pauli Murray. In fact, Pauli Murray's achievements were often behind the scenes," Lau said.

She was one of the most consequential civil rights leaders of the 20th century. Too many Americans don’t know her name. A new film about this pioneer who was raised and worked in Durham premiered tonight at the Carolina Theater in her hometown. #MyNameIsPauliMurray #abc11 pic.twitter.com/5z9VlmLyoh

The documentary that premiered during the winter at Sundance Film Festival tells of how before icons like Thurgood Marshall and Ruth Bader Ginsburg made their mark on Supreme Court cases for racial and gender equality, it was Murray who devised the legal strategy that Marshall and Ginsburg went on to win with.

"I really never realized the magnitude of all that she had done," said Stevens-Holsey, who now sits on the board of the Murray Center. "She wasn't in the history books. I hadn't read magazine articles about her. And she never boasted about anything that she did."

Much of the documentary is told in Murray's own voice. Producers dug up old audio recordings from Murray.

The film recalls Murray's story as the first Black woman ordained as an Episcopal priest. And her struggle with gender identity in an America of another time. She never came out as gay but fought for the human right of people to be their authentic selves.

"I think (the film) is going to be an amazing vehicle for the world to learn more about Pauli Murray," Lau said.

The home that Pauli Murray grew up in on Durham's West End is now being restored as the home of the Pauli Murray Center for History and Social Justice.