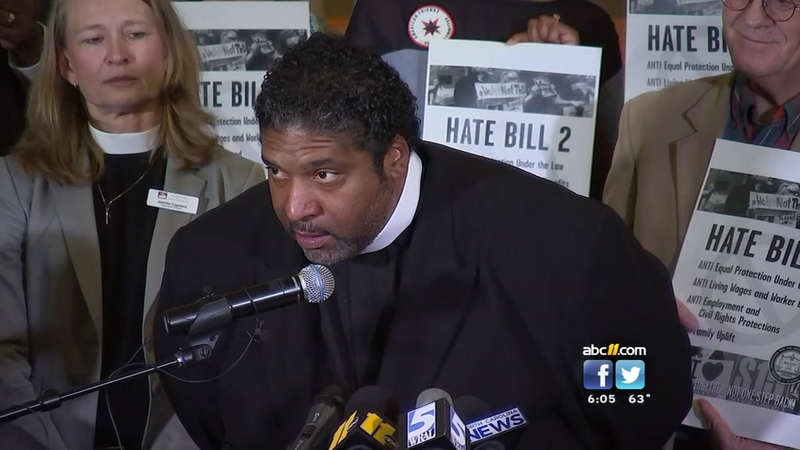 Moral Monday to focus on HB2

"We call on the media and other North Carolinians don't be bamboozled. Don't be hoodwinked. These bills are being filed all over the state and the country, Indiana, Mississippi, all because it's about power politics - using sex and homophobia and racism to stir the vote," Barber said.

CLICK HERE TO READ THE TEXT OF HB2 (.pdf)

Barber said when Moral Monday protests resume at the General Assembly next week, the new law - which they've dubbed "Hate Bill 2" will be the focus.

Barber - backed by clergy and LGBTQ advocates at a news conference Friday - said HB2 discriminates against the very morals and values supporters of the bill claim they want to protect.

Meanwhile, supporters of HB2 plan their own demonstration at noon on Monday.

Backers of the law will rally at Halifax Mall, in the grassy area behind the General Assembly Building in Raleigh to voice support for HB2.

"As the eyes of the nation are on North Carolina for the first day of the General Assembly's short session, April 25th, our goal is to show the nation what it looks like to see churches, families, and people from all political parties, in unity, praying for our leaders and asking them to continue to protect our families," said a news release from KeepNCSafe.org.

HB2 bans local governments from establishing anti-discrimination rules that exceed state standards. The law, in-short, mandates that transgender people use the bathroom that matches the biological sex listed on their birth certificates. Supporters say it keeps men out of women's restrooms and it protects women and children.

Beyond the "bathroom" issue, the law blocks workers from suing in state court over employment discrimination and bans local governments from setting minimum wage standards.

Barber said people are being distracted by the sensational headlines to do with transgender people and bathrooms and are not realizing how far the bill also goes on other issues.

"Barber will bring his coalition of the angry for their annual airing of grievances. Meanwhile Republicans will be standing strong in protecting the privacy rights of young girls and women across the state. Further, Republicans will be examining our state budget surplus and using the extra revenue created from tax and regulatory reform to reward our teachers and state employees with much deserved raises," offered Dallas Woodhouse, NCGOP Executive Director.

Monday's protests will be the third year of the Moral Monday movement. Protestors plan to drop off thousands of petitions calling for the law to be repealed followed by a mass rally and a sit-in at the General Assembly building.

Governor Pat McCrory - who quickly signed the law after it was passed - has defended it saying "there is a great deal of misinformation, misinterpretation, confusion, a lot of passion and frankly, selective outrage and hypocrisy" around the issue.

But McCrory has asked legislators to repeal a part of the law that bans workers from filing discrimination claims in state court.

Leaders in the General Assembly have said they don't see any need for changes.