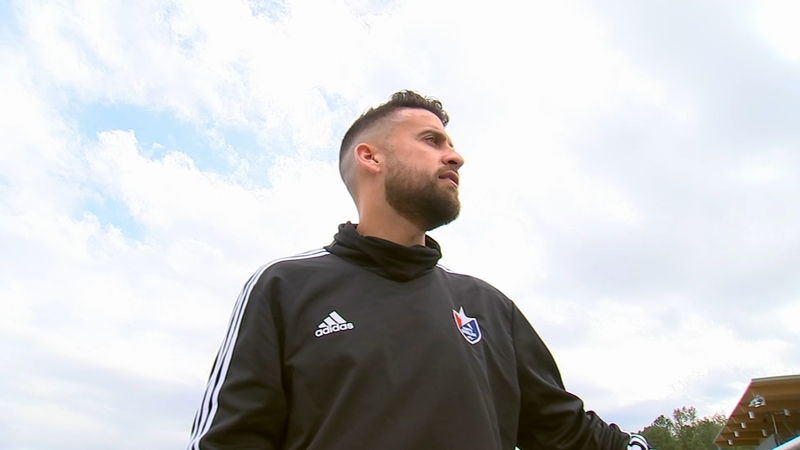 RALEIGH, N.C. (WTVD) -- You don't get much more Raleigh than Nazmi Albadawi.

Born in the capital city, he attended Athens Drive where he was student council president all four years and then moved on to NC State, where his soccer career blossomed.

Now, a star midfielder for North Carolina FC, Albadawi is the quintessential immigrant story. His Palestinian parents left their homeland for Kuwait before heading to the USA when Iraq invaded in 1990.

Once in Raleigh, they fell into the local Palestinian community. Albadawi was raised both proudly American and Palestinian. He calls the USA "the greatest country in the world" but is also fiercely proud of his heritage.

That pride coupled with his soccer skills paved the way for an exceptionally unique opportunity. Representing his parents' homeland on the international stage. It was a chance that Albadawi first turned down, because of concerns about safety, but when Palestinian representatives came knocking a second time, he decided he couldn't say no again.

Nazmi played his first game for "The Knights" last November, scoring the game winner in a 2-1 victory over Pakistan. As the only American-based player on the team, his upbringing has been wildly different than the native Palestinian territory players. Still, he says they welcomed him as a brother from the start.

Now eight games into his career with Palestine, Albadawi has done some serious globetrotting. He's played games in China, Singapore, Dubai, Qatar and of course the Palestinian territory.

Upcoming World Cup qualifying games in Bahrain and Uzbekistan loom this month. As you'd expect given political realities, traveling isn't easy for the team. With his American passport, Albadawi is able to fly in and out of Tel Aviv with relatively little issue.

He said the longest he's ever been questioned before entering Israel is an hour or so. His teammates with Palestinian passports, on the other hand, have to leave at 6 a.m. to make the airport for a 10 p.m. flight.

Albadawi said the experience makes him appreciate the good fortune of being raised in the United States. Seeing what his teammates go through to represent their homeland has been a "gratifying, humbling and very rewarding" experience.