Raleigh couple decides not to delay, opts for virtual wedding 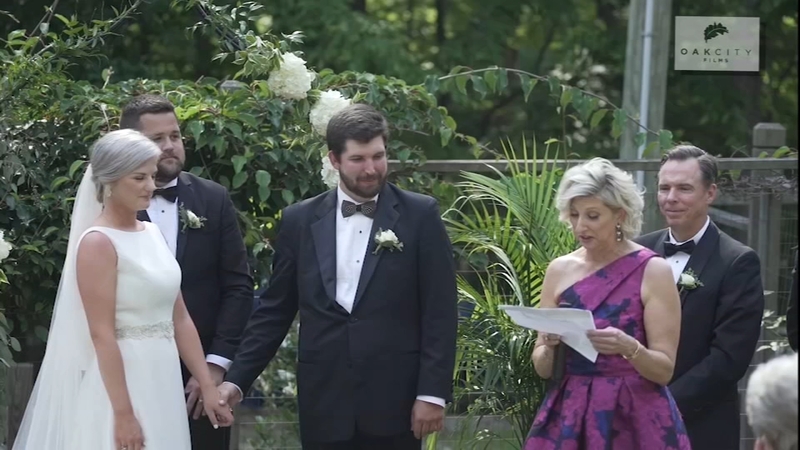 RALEIGH, N.C. (WTVD) -- Anyone who has ever planned a wedding knows no matter how large the guest list, you can't invite everyone.

But when COVID-19 forced a Raleigh couple to move their wedding from inside a church to the backyard of the mother of the bride, they found a way to include all the original 220 guests--and even more.

Bailey Packard said it was quite an event, "We will never forget it and it will be a story for us to tell our kids and their kids."

WATCH: Here are some tips for having a wedding celebration in the age of coronavirus
EMBED More News Videos

In the age of coronavirus, people are now expert at remote work, remote learning and even remote worshipping services, but how can you adapt your own wedding while still holding on to some traditions?

She and her now-husband Sam held out hope for weeks that that their June 6 wedding at Raleigh's St. Timothy's Episcopal Church would still happen despite the pandemic.

But in May, they realized it wouldn't be possible and didn't think postponing it was a good option either.

"There's no telling what's going to happen tomorrow or even six months out. So just keeping on with the original date was the best route for Sam and I," she said.

And after six years of dating and an 18-month engagement, they decided to keep the June 6 date.

"We were tired of waiting. So we made the decision to keep it small," Packard said.

But they were still disappointed that under state pandemic guidelines, they could only have 25 people at their now outdoor wedding.

Then Sam's mom had an idea: maybe they could hire someone to live-stream the wedding.

One of the bridesmaids knew Nathan Morris, the owner of Oak City Films.

The idea of live-streaming weddings is gaining steam, according to Morris. "We've had a couple of people that have been trickling in now especially as the pandemic has worn on, that are starting to want to proceed anyway and do virtual weddings," he said.

When she heard Morris' pitch, Packard said she was all-in.

"That was a done deal once he said he could do that because then we could still include everybody from the comfort and safety of their house," Packard said.

Morris was able to live-stream the wedding on two platforms--YouTube and Facebook Live--where guests could even comment in real time.

The virtual guest list had no limit, so some, who or various reasons wouldn't have been able to attend the original wedding, could also be included.

Packard was elated. "We were able to send it to even more people than we had invited originally, which was super nice."

She added that she felt like they didn't miss out on anything.

"We were still able to have a special day and include everybody. So we're thankful for that," she said.

At the end of their wedding video, they stop and kiss as they walk away from the altar as Stevie Wonder sings, "Here I am, signed, sealed and delivered."