Deals or disagreements? What to expect in NC General Assembly's new session with a divided government 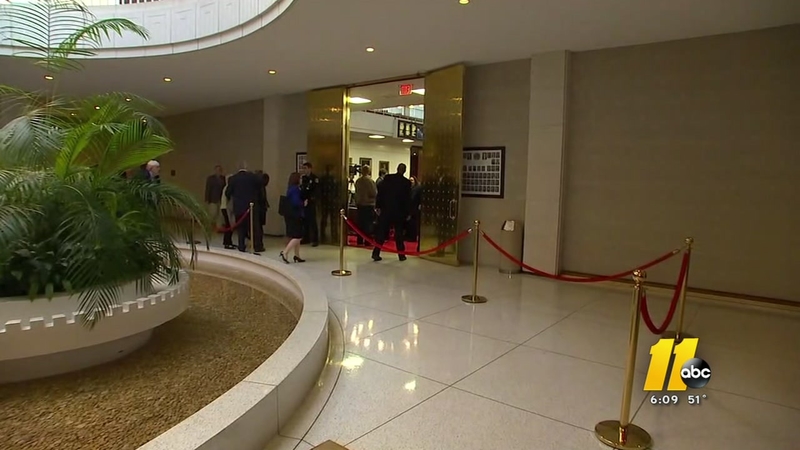 RALEIGH, N.C. (WTVD) -- The General Assembly of North Carolina ushered in its new session Wednesday, with lawmakers calling for consensus and compromise in the face of divided government.

"Let's search for middle ground instead of the high ground," Rep. Tim Moore, R-Cleveland, proclaimed after being elected as Speaker of the House for a third two-year term. "Let's bring coalitions together to achieve reform. Let's negotiate in good faith for the good of our state."

The 154th General Assembly will continue a streak of strong Republican majorities, but for the first time since 2012, the GOP will lack the numbers to override an executive veto, giving major leverage for Gov. Roy Cooper, a Democrat.

"Republicans will have to work across the aisle, but so will Democrats," Sen. Phil Berger, R-Rockingham, the returning Senate President, told his colleagues from the dais. "If we are to have a successful session, we all will have to accept outcomes that don't cater to the extremes. I know we're capable of this -- and so do you."

Tremendous energy & anticipation on this #NCGA Opening Day. Great to see so many lawmakers with their families on the floor, & engaged citizens in the galleries. @NCLeg @NCGOP @NCDemParty @ABC11_WTVD #NCPol pic.twitter.com/KKEHDVaePA

At the top of the agenda for lawmakers is crafting the state budget for 2019-2020, a behemoth task of allocating taxpayers' money to support a wide variety of government programs such as education, health care and infrastructure (the fiscal year runs from July 1 to June 30).

In a one-on-one interview with ABC11, Speaker Moore predicted the budget would rise this next fiscal year and signaled that Republicans will agree to more spending in several areas, including health care, transportation, and education.

"We've had five consecutive years of teacher pay (increases), we've also increased pay for other state employees around the state, but the thing that I've been hearing more and more is that we need to do something about school construction," Moore says. "We really need to invest in school construction."

Specifically, Moore said the rural areas of North Carolina, particularly in the northeastern part of the state, have failing plumbing, heating and air conditioning, and the counties lack the resources to pay for the improvements themselves.

"In my mind, what's good for one end of the state is good for the other. These communities that have the greatest challenges really require the greatest investment," Moore said.

A longtime resident of King's Mountain, Moore's position as Speaker is a unique one: he's been elected to represent a small mostly-rural district between Charlotte and Asheville, and he's also been elected to a prominent position in Raleigh to sit at the table with the Governor, who was elected by a statewide majority.

With his re-election, moreover, Moore will become the longest-serving Republican Speaker in decades.

"I've traveled the state from Manteo to Murphy and even points further than that," Moore said. "In those areas if there's not industry and there's investment, then what do you have? If you have folks who are struggling who can't find jobs, they're going to need public assistance of some kind. That costs the state overall."

After taking the oath, the 120-member House of Representatives is now in session! (50 Senators are doing the same in the other chamber) @ABC11_WTVD @NCLeg @nchousedems @NCHouseGOP #NCGA #NCPol pic.twitter.com/ZmTVqLHyuu

Though Cooper retains the power of the veto pen, his increased leverage extends to his colleagues on Jones Street, which include two Wake County Democrats -- House Minority Leader Darren Jackson and Senate Minority Leader Dan Blue.

"We are very sincere when we say we want to see how bipartisanship really works," Blue, a veteran lawmaker entering his 34th year in Raleigh, told ABC11. "This session creates the possibility for real bipartisan efforts to address the issues facing North Carolinians.

Asked where Democrats will most likely use their increased leverage, Blue answered that expanding Medicaid and access to health care are emerging as top priorities.