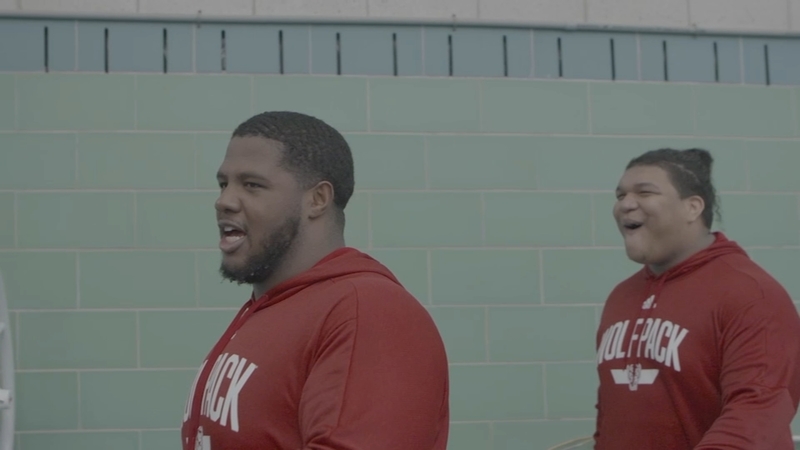 RALEIGH, N.C. (WTVD) -- Offseason team-building exercises are universal in football. Military-style training is nothing new either, but for whatever reason something called "The Program" clicked with the Pack.

"Experienced personnel from various branches of the military, especially Marines, the Marine Corps, and they brought us in and they taught us how to lead." said NC State offensive lineman Joe Sculthorpe.

The workouts weren't easy, starting with the scheduling.

"We had to get up at four in the morning ... on a school night," remembered cornerback Shyheim Battle.

Among the activities: jumping into the pool with your hoodie on and then trading it with a teammate while treading water.

"They gain trust, like if you was about to drown, your own partner had to help you, like uplift you so you wouldn't drown. He had to push you up," Battle said.

Not everyone is Michael Phelps. It was a lesson in mutual dependence.

"I'm not a great swimmer -- I needed some people to help me out and I was helping people out. It was just great to see everyone helping each other out," said linebacker Payton Wilson.

The overall result was twofold. Lingering resentments from the previous year were laid to rest and a singular shared focus was adopted.

"It's relationships. There's no groups or anything, like we're all together and there's no separation and no individualism. None of that stuff. We got rid of a lot of bad energy from last year," Battle explained.

As for the head coach -- he saw the growth in his players after "The Program" and loosened the reins of his program.

Sculthorpe says that was key to this year's improvement from last year's 4-8 mark to the Wolfpack's current 7-3 record.