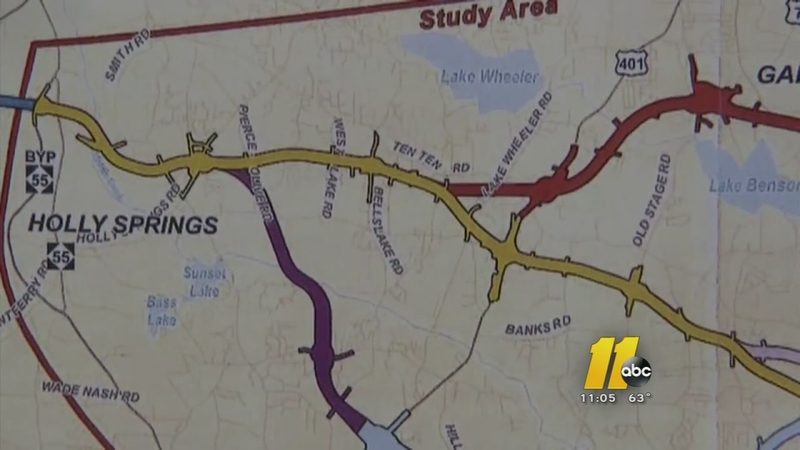 APEX, NC (WTVD) -- The Sunset Hills subdivision north of Holly Springs in Apex has a lot of moms and dads with young families, and they got quite a surprise when ABC11 told them that the I-540 extension could soon be slated to run right through their cul-de-sac.

And they would have to move.

Patrick Stevenson is one of those Sunset Hills dads. He has a wife, four kids and his Labradoodle, Boomer. And Wednesday's announcement from the state -- recommending the Orange Route to complete the southern half of 540 -- means the Stevensons may have to leave to make way for the highway.

"I am concerned that we'll have to move, I don't know how long they're potentially going to be putting it through."

The project also comes as a complete surprise to some of Stevenson's neighbors.

"I feel like somebody should've told me that," said Derek Dean. He told ABC11 he had "no idea at all."

It's not a done deal yet. The proposed route still needs approvals from NCDOT's federal and state partners.

CLICK HERE TO SEE A MAP OF THE PROPOSED ROUTES (.pdf)

But local officials, such as Holly Springs mayor Dick Sears like the plan.

"Ninety-nine percent are extremely happy with this choice," Sears said.

Sears and his counterparts in Fuquay-Varina and Garner insists it's the least intrusive of the color-coded alternatives.

But still the orange route upends 271 homes and businesses in the path of the project, including the Stevensons, a growing family suddenly living in what may be a shrinking subdivision.

"So maybe this is a good opportunity for us to find a new home and a new place," Stevenson said. "But it's scary to have to be presented with that."

The final decision should be made this spring after stakeholders have had a month to weigh in. If it gets the go-ahead, the project could get underway in 2018.

If you want to get in touch with the DOT to see if your property is on the list of homes threatened, there are a number of ways to do that: