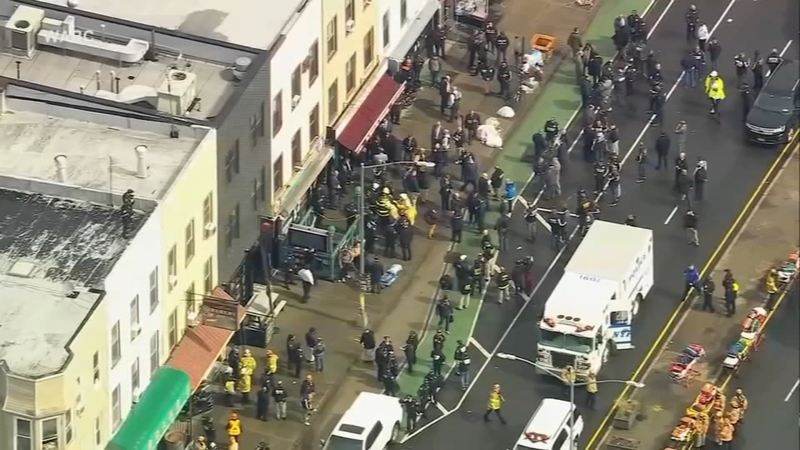 RALEIGH, N.C. (WTVD) -- Hazim Dahir was in New York with his family for Spring Break for four days.

On the last day, chaos erupted on the subway in Brooklyn.

"We went on the subway many times," said Hazim, and he noted that he took the same train line that first responders rushed to Tuesday.

They had also gone to Brooklyn to catch a boat around the New York Harbor to see the Statue of Liberty and Ellis Island.

"I honestly woke up this morning telling the kids, 'Let's see what tragedy is unfolding today,'" he said.

These types of mass casualty tragedies are getting new focus with Tuesday's incident in Brooklyn and the shooting in downtown Sacramento that killed six people.

"It can happen," said Gerald Baker, sheriff of Wake County. "It doesn't have to be in the subway, we all know that. It's happening all over the country."

Baker did have to respond to a major incident late in 2020 when someone shot at the doors of the Wake County Justice Center.

He said it won't stop him from his day-to-day and from training to be prepared for incidents like this.

"We're constantly keeping ourselves prepared so we can respond to anything that occurs in this county," Baker said.

Hazim meantime said he's grateful to be back in Raleigh

"We had a lot of fun," he said. "New York is amazing as long as you get to leave."
Report a correction or typo
Related topics:
raleighnew yorksubwaymass shootingfamilysubway crime
Copyright © 2022 WTVD-TV. All Rights Reserved.
TOP STORIES
LIVE: Tornado warning issued for parts of northeastern NC counties
Homeless veterans get an assist from Durham's Rotary Club
Truck slams into NC woman's new home
SCOTUS makes it tougher for prisoners to argue counsel was ineffective
Shelf cloud seen in Raleigh ahead of line of storms
New NC flood monitoring system ready for next big storm
Father puts 1,000 miles on his car to find specialty formula
Show More
Student says he was told not to mention 'Don't Say Gay' law in speech
Clayton police arrest man in shooting that injured 1
More than 75,000 pounds of baby formula lands in US amid shortage
Report: Top Southern Baptists stonewalled sex abuse victims
Arby's is selling a fast-food staple it's never offered before
More TOP STORIES News