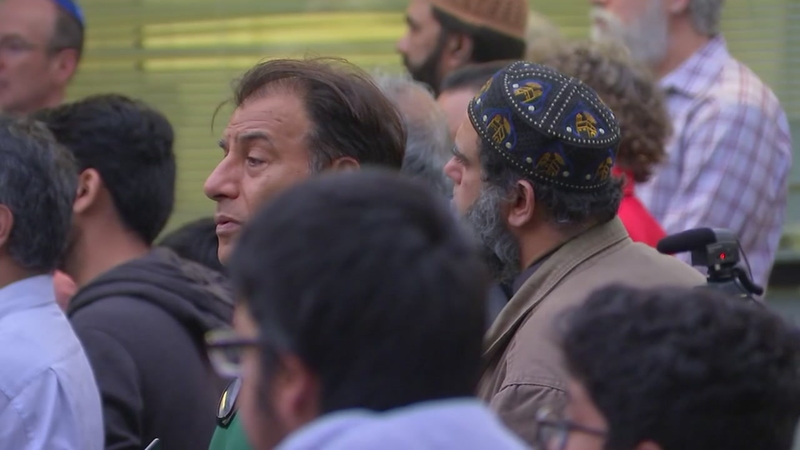 CARY, N.C. (WTVD) -- Members of various faith groups attended a vigil Friday night in Cary to honor the victims in a massive terror attack that happened at two mosques in New Zealand.

Rao said he is working with Wake County Sheriff Gerald Baker to set up an event to address concerns about gun safety and safety at houses of worship.

There was increased security presence at mosques across the Triangle, with marked and unmarked police cars stationed outside the mosque in Morrisville and Cary police parked outside the vigil.

While some people learned of the attack before going to sleep last night, others woke to the news.

"This is an opportunity for reminding people that hate speech may have drastic consequences and criminal results. And if you see somebody making this type of hate speech, we need to step up and explain to them that this is not acceptable," said Ahmed Khalil with the Islamic Center of Morrisville.

49 people were murdered, with dozens more injured in two shootings, which was broadcast live on Facebook. New Zealand authorities have arrested and charged an Australian citizen who allegedly held anti-immigrant and white nationalist beliefs. Police also arrested two other people whose roles they are working to determine.

"There are more good people than bad people. And for the sake of our humanity, for the sake of these little children, we must rise, we must stand up, and we must crush hate, and bigotry, and divisiveness," said Faisal Khan, a community activist with the Carolina Peace Center who helped organize Friday's vigil.

"The question we need to ask ourselves is why we continue to see these horrible massacres and murders," Khan said.

Speakers included faith leaders from across the area and several local officials.

"It's a very frightening time in America where we want to live in freedom, and at the same time as we're enjoying freedom and taking our shot to greatness in this state, in this country, we're living in fear," Rao said, who credited local police for stepping to their enforcement efforts.

"An attack on any faith is an attack on all faith communities," said State Senator Wiley Nickel, who represents Wake County.