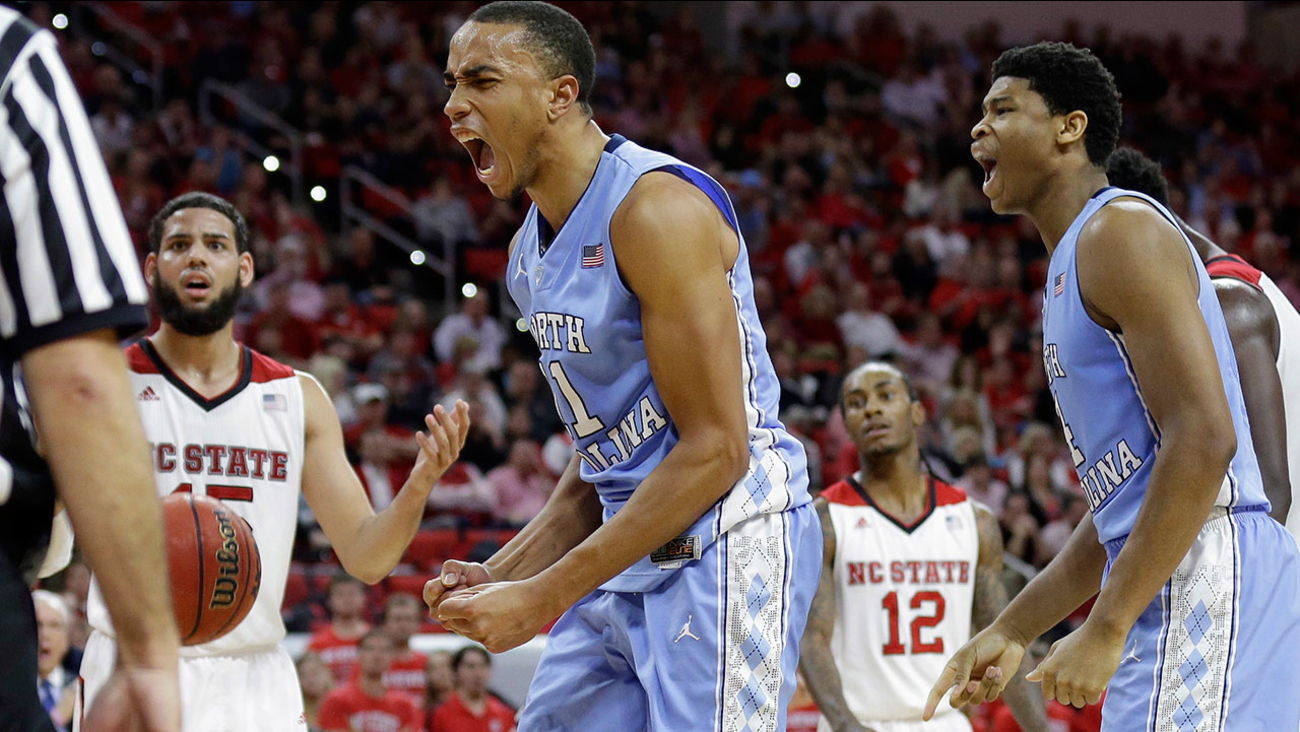 RALEIGH -- North Carolina has spent the last two games building leads and stretching them out instead of letting an opponent back in the game.

The seventh-ranked Tar Heels need to keep doing that to make a long run in March.

Brice Johnson had 22 points and 11 rebounds to help UNC beat North Carolina State 80-68 on Wednesday night, keeping the Tar Heels atop the Atlantic Coast Conference with yet another win against their nearby rival.

"We do know teams have come back and beat us in those ways, so we want to be able to just keep going and keep pushing it," Johnson said. "Not many people can stop us when we're playing our best."

Justin Jackson added 17 points for the Tar Heels (23-5, 12-3 ACC), who shook off a slow start and an early 13-point hole. It wasn't nearly as impressive as their weekend rout of then-No. 11 Miami, just a steady and effective performance in which they stayed in control - something they had sometimes struggled to do over the past two seasons.

That included blowing an eight-point lead in the final 7 minutes of last week's one-point home loss to rival Duke. This time, the Tar Heels led by five at halftime then shot 52 percent to lead by as many as 19.

The Tar Heels entered this game alone in first place in the ACC, just ahead of No. 12 Miami. They still have games at No. 3 Virginia this weekend and at No. 15 Duke in the next week's regular-season finale.

"Going into this game, we were thinking it's a four-game sprint to the finish," senior Marcus Paige said. "Now it's three."

League-leading scorer Anthony "Cat" Barber scored 32 points for the Wolfpack (14-14, 4-11). N.C. State shot just 37 percent and couldn't keep up once UNC's offense found a rhythm on the way to 42 points in the paint.

Less than a minute to go until UNC vs. NC State tips off! #abc11 pic.twitter.com/RAKttZdq4m

UNC: Paige had averaged 29 points on 57-percent shooting in his last two visits to Raleigh, but finished with 10 on 4-for-9 shooting. ... Sophomore Theo Pinson had a good outing with seven points and three rebounds off the bench while helping defensively on Barber. ... UNC finished with a 43-36 rebounding advantage. ... Johnson's double-double was his ACC-leading 17th. ... The Tar Heels have won 19 of 21 in the series, including 11 of 13 in Raleigh under coach Roy Williams.

Barber came in averaging 23.1 points but had scored just nine in last month's meeting. He blew past that number with 16 points on 7-for-9 shooting in the opening 8 minutes, including a jaw-dropper of a crossover dribble against Nate Britt to bury the 3-pointer that pushed N.C. State to the 23-10 lead.

But Barber scored just six points over the next 25 minutes as UNC kept running a series of defenders at him. Ten of his points came late after UNC had built a 17-point lead.

"I thought he actually got a little tired," Gottfried said. "He was really good early and then I thought later he was really good. Struggled somewhat in the middle. But boy those first 10 minutes of the game, he was spectacular."

UNC travels to No. 3 Virginia on Saturday.