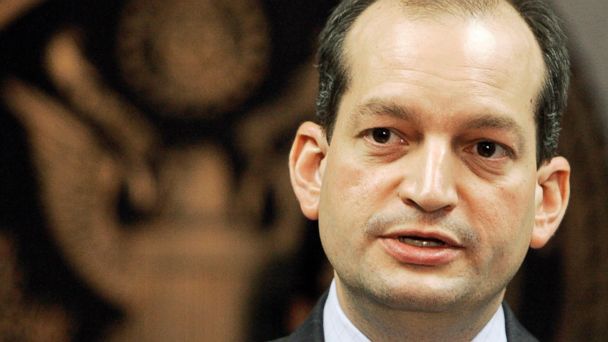 Acosta would be the first Hispanic to be selected for Trump's Cabinet.

The announcement comes after Trump's first nominee for secretary of labor, Andrew Puzder, formally withdrew from consideration for the position Wednesday, a rare move for a Cabinet-level pick.

Puzder came under scrutiny after admitting earlier this month that he had employed an undocumented worker for years. In 1990 his ex-wife claimed that he had abused her; she has since withdrawn the allegations. He has denied wrongdoing.

His withdrawal is the first unsuccessful nomination of the Trump administration. Eleven of his 23 Cabinet-level picks are yet to be confirmed.

Senate Minority Leader Chuck Schumer had been calling on Puzder, who heads CKE Restaurants, which owns Hardee's and Carl's Jr., to withdraw for more than a week. Several GOP senators hinted that they had reservations about his nomination.

Acosta is the chairman of U.S. Century Bank, which is the largest domestically owned Hispanic community bank in Florida, and is the dean of Florida International University Law School.