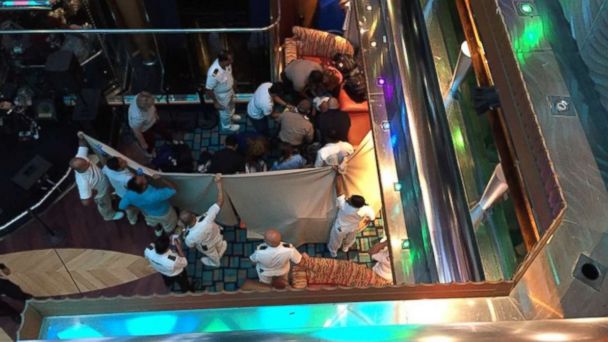 An 8-year-old girl died Saturday after falling from one deck in a cruise ship's interior atrium to a lower deck, officials said.

The girl, whose name has not been released, fell on the Carnival Glory cruise ship while it was docked at the Dante B. Fascell Port of Miami on Saturday morning. Miami Fire Rescue personnel responded to the scene around 8:15 a.m. ET and provided emergency care to the child, according to the Miami-Dade Police Department.

The girl was subsequently taken to the nearby Ryder Trauma Center, where she died from her injuries, police said.

Erika Benitez of Miami-Dade Fire Rescue told ABC News the girl was in critical condition when she arrived at the hospital.

It's unclear what led the child to fall. Homicide detectives are investigating the incident, police said.

Carnival Cruise Lines said the ship's command immediately contacted police after she fell and transported her to the ship's medical center.

"Our most heartfelt care and concern are with the family at this very difficult time." Carnival Cruise Lines spokesperson Jennifer de la Cruz said in a statement Saturday.