WTVD
By Andrea Blanford
RALEIGH (WTVD) -- Two men charged in the murder of a Raleigh teenager faced a judge for the first time Thursday afternoon.

Two others, a young couple accused of accessory after the murder are in jail and video-conferenced in to hear their charges read aloud. Raleigh police say they helped one of the suspects as officers were searching for him.

It happened at a city park on Collegeview Avenue, not far from NC State's campus.

Family members who were in the courtroom for Thursday's proceedings said Maria Nambo and Leonardo Calvillo, the two Raleigh police say were helping Mondragon hide from police, are married and Valenzuela is their cousin.

Police arrested Mondragon Wednesday in a Super 8 motel room on New Bern Avenue that they say Nambo booked under her name and helped pay for.

According to police records, Valenzuela was already in jail, arrested on Monday on a common law robbery charge from April 12. That's when police say he and another man stole a $100 bill from 16-yr.-old Jose Valdovinos.

Police say Valdovinos was also at the park Saturday night; he was shot at but ran away, dodging the bullets. His two friends, Gonzalez-Martinez and 23-year-old Daniel Pittman were hit. Pittman was treated and released from WakeMed. Gonzalez-Martinez died on the scene.

Mondragon and Valenzuela shared an apartment in Raleigh. One of their neighbors tells Eyewitness News the two moved in together about 5 months ago.

"At first I thought they were some good guys but then you see people coming in and like the house would be smelling like drugs and stuff," said Yoselin Lorenzo. "And then, a couple of times the police had to come and they would never open the door."

Mondragon and Valenzuela are being held in the Wake County Detention Center without bond. They're due back in court on July 2. 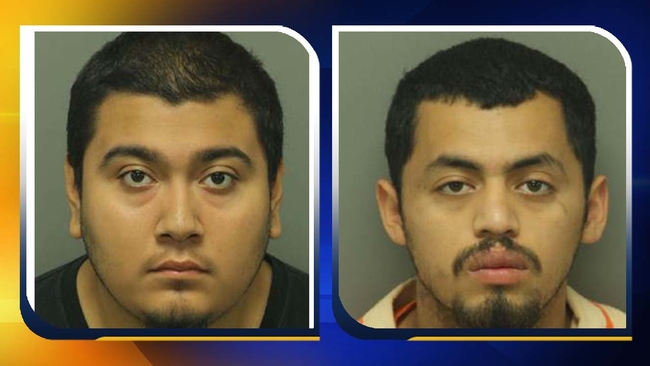