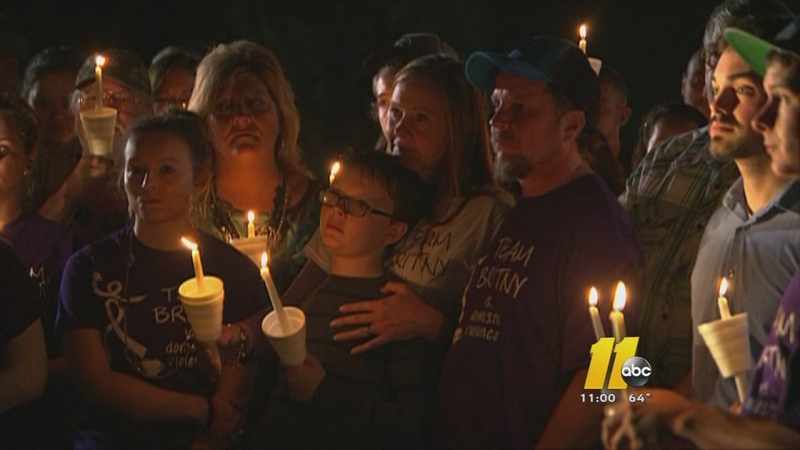 KIPLING, NC (WTVD) -- Friends and family gathered around the Kipling Cross south of Fuquay-Varina Thursday night to remember Britny Puryear one year after the young mother was shot to death. Loved ones say they believe she was the victim of ongoing domestic violence.

The case has touched many in the community.

"I've had several girls reach out to us for help after seeing Britny's story," said Britny's father, Stephen Puryear.

"Last year on Nov 6 I was home watching football & they were showing commercials about domestic violence...then our phone rang"-Britny's dad

He explained the girls are looking for guidance in getting out of domestic violence situations.

It was just after 9:30 p.m. on November 6, 2014 that police in Fuquay Varina say they were called to a shooting at Puryear's apartment on Bridge Street. When they arrived, they found the 22-year-old already dead. Police then arrested the then 21-year-old Logan McLean. He was Puryear's live-in boyfriend and father to their then 5-month-old son.

McLean was charged with Puryear's murder and for possession of a firearm by a convicted felon.

The next day, a neighbor told ABC11 that her daughter heard the gunshot Thursday night and saw McLean run out of the apartment. She also said she had witnessed several altercations between the couple, including one the day Puryear died.

"I remember the last conversation I had with Britny. She told me she wanted to be a great mom," said Jim Puryear, Britney's uncle at a celebration of life Thursday evening at Kipling Cross.

"I remember the last conversation I had with Britny, she told me she wanted to be a great mom."- Britny's uncle #PuryearVigil

The family also invited representatives from Interact - the nonprofit agency that gives support to victims of domestic violence and sexual assault - if anyone attending the celebration needed to talk to domestic violence advocates.

A vigil was held Thursday at the Kipling Cross