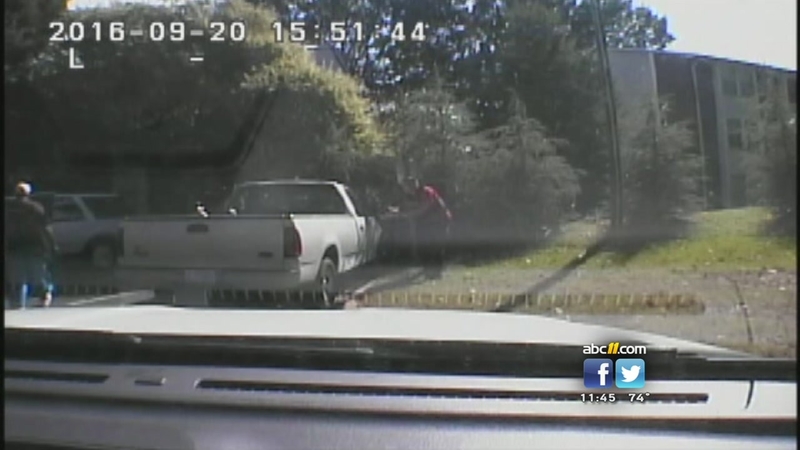 CHARLOTTE (WTVD) -- Charlotte-Mecklenburg police released two videos of the fatal officer-involved shooting of Keith Lamont Scott, one from a dash cam and one from a body cam. They also released a new statement on what led up to the incident.

In the dash cam video, Scott is seen exiting his car. He then walks backwards with his hands down prior to being shot. It's not clear whether there's anything in his hands.

There is no audio on the first part of the recording. It came that way from police.

Police also released images of items recovered from the scene, including photos of a gun.

In a statement released Saturday evening, two officers were sitting inside an unmarked police car prior to the shooting, preparing to serve an arrest warrant for a different person.

Police said a white SUV pulled in and parked beside them. They said they saw Scott preparing to use marijuana but they did not consider it a priority at the time.

A short time later, authorities said they saw Scott hold up a gun and because of that they had cause to arrest him and investigate. They said it was a decision for "public safety concerns." Police said they left the immediate area to get marked duty vests.

When they returned, officers said they saw Scott again with a gun. They said they gave repeated commands to drop it but he refused.

Another officer came to assist and tried to use a baton to break the front passenger window to try to arrest Scott.

Police said Scott then exited his car with the gun and backed away. He continued to ignore commands, according to authorities, and officers said they perceived "Scott's actions and movements as an imminent physical threat to himself and the other officers."

Detectives investigated and interviewed multiple witnesses at the scene.

Investigators said the gun recovered at the scene had Scott's DNA and fingerprints on the gun. The gun was loaded and Scott was wearing an ankle holster, police said.

After watching the video, an attorney for the Scott family said at a news conference Saturday evening that a lot of questions remain.

"Mr. Scott steps out of the vehicle. He does not appear to be acting aggressive towards any law enforcement officers on the scene. He doesn't appear to be making motions or gestures as though he's arguing with anybody. He doesn't lung at any of the officers. It appears he has his hands by his side. There is no definitive evidence in this video that there's anything in his hand and what that object is," said Scott family attorney Justin Bamberg.

Gov. Pat McCrory issued a statement on the police's decision to release the tapes.

"As governor of North Carolina, I concur with the Charlotte police chief's decision to release the tapes. I have been assured by the State Bureau of Investigation that the release will have no material impact on the independent investigation since most of the known witnesses have been interviewed. We have appreciated the ongoing dialogue and team work between state and city officials to seek public transparency while protecting the integrity of the investigation and the rights of all parties involved in this case," McCrory said in a statement."
Related topics:
charlotteofficer involved shooting
Copyright © 2021 WTVD-TV. All Rights Reserved.
TOP STORIES
'An amazing mom:' Friends mourn Apex teacher who died from COVID-19
Duke apartment residents warned about flooring, structural issues
LATEST: 1/3 of state employees ordered to be vaccinated are not
Authorities identify gunman who shot 15, killing 1, at TN Kroger
'The View' hosts test positive for COVID moments before VP interview
Raleigh apartment residents frustrated after 4th fire in a month
Show More
NC sisters find another woman in mother's casket at funeral home
'The Wire' actor Michael K. Williams died of overdose, autopsy finds
Hurricane Sam to rapidly intensify into major hurricane
After controversy, Durham School of the Arts names new principal
Raleigh spa raises money to help Women's Center
More TOP STORIES News