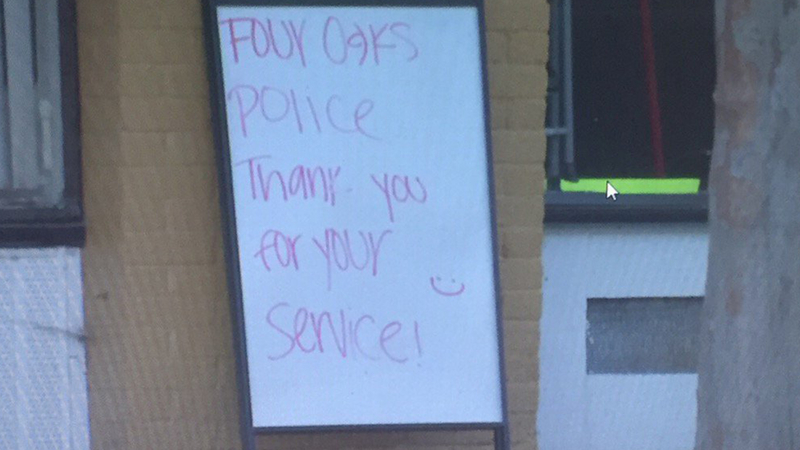 FOUR OAKS, NC (WTVD) -- The Four Oaks police officer captured on video during a profanity-laced traffic stop Saturday night is getting support from people in his community.

Outrage from the suspect's family and many on social media followed the release of a bystander's cell phone video showing Lt. Tim Lebow cursing at 37-year-old Joshua Fillinger - who officers were seen holding to the ground during a traffic stop-turned drug arrest.

It happened around 7:30 p.m. Saturday on Saunders St. when FOPD set up a driver's license checkpoint. Officers said they stopped Fillinger because he smelled of marijuana. Four Oaks Police Chief Stephen Anderson told ABC11 what the public doesn't see in the video is before officers Tased and handcuffed Fillinger, he punched Lt. Lebow four times in the face, kicked three other officers, tried spitting on a female officer, and running away.

On Friday, longtime friend of Lt. Lebow, Rose Fox, organized a gathering outside the police department where a dozen supporters came by to stand with those in uniform.

"They come by our house two and three times a day, how can I not appreciate that?" she said.

Regardless of the reason his son was stopped Saturday night, Steven Fillinger told ABC11 earlier this week it should've never ended the way he saw it turn out on the video that has now gone viral.

Still, friends of Lebow said they fully support him and his actions.

"He could've got caught on camera beating this guy, doing what everybody else does, but he had enough self-restraint to hold himself," said Joshua Holmes.

Chief Anderson said he disciplined Lebow for the profanity.

Fillinger faces assault and drug charges. It's unclear whether his family will seek any legal action.