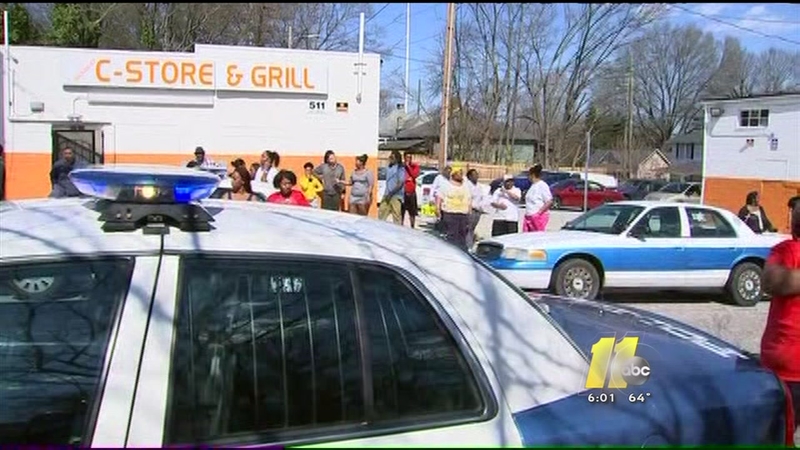 In a release issued on Wednesday, the DA's office concluded that Officer Twiddy shot 24-year-old Denkins on Feb. 29 "as a matter of last resort and only because he reasonably believed his own life was in danger."

The release went on to say that Denkins was armed and grabbed Officer Twiddy's gun during a struggle.

The DA's findings back up Raleigh Police's report and a preliminary autopsy report which both stated that Denkins was shot during a struggle after a foot chase in the downtown area.

The DA's release noted that the final autopsy report from the medical examiner's office had not yet been released; however, it stated that: "no one involved in the autopsy or the investigation expects the final report to contain any significant information which would alter any pertinent findings already known."

Denkins' autopsy was conducted on March 1, with preliminary results indicating that Denkins was shot four times in the chest, both arms and his right shoulder.

One bullet entered Denkins' left forearm, while another entered his right upper arm and traveled from front to back, fracturing the bone.

According to the release, another bullet entered Denkins' right side, traveled downward and backwards, striking Denkins' ribs, aorta and both of his lungs.

The release goes on to say, "one projectile entered Mr. Denkins' right shoulder, traveled from back to front and right to left and lodged in his clavicle." The wound was 1 inch below the top of Denkins' shoulder. No other injuries were noted. The toxicology for Denkins did indicate the presence of cocaine.

The medical examiner was not able to determine the order of the wounds nor the distance from which they were inflicted.

Family and friends react to the news.

Denkins' mother has said her son was shot in the back while running away from police near Bragg and East streets.

However, Freeman told ABC11 Tuesday that the shot that Denkins' family said hit him in the back was not directly from behind. She claims it hit Denkins as he turned slightly during a hand-to-hand struggle with the officer.

Freeman said the physical evidence supports the officer's story that Denkins tried to pull a gun as the officer was attempting to tackle him - and that's when Twiddy began firing.

She added that there was also forensic evidence to support Twiddy's claim that Denkins grabbed the officer's gun.

"Both Mr. Denkins' gun or the revolver that was found at the scene and officer Twiddy's gun were sent to the crime lab for analysis," Freeman said. "Mr. Denkins DNA was located on the barrel of the officer's gun, touch DNA. And that is consistent with what officer Twiddy indicated within a matter of a couple of hours of the incident of Mr. Denkins having grabbed his gun."

As for the other gun found at the scene, freeman said Denkins' DNA was found on it but not the officer's - indicating Twiddy never touched the other gun.

Based on the evidence available, Freeman determined that no criminal charges were warranted.

"This shooting is a tragedy for all involved," the release stated. "The Denkins' family has suffered a tremendous loss. However, the investigation has conclusively determined that Officer Twiddy acted consistently with his training and experience."

After seeing the angry reaction of the Denkins family, the district attorney said she knows her decision won't sit well with many, but added it was the only decision she could make under the law.

"They're obviously going through a period of great loss and grief," Freeman said. "They were not satisfied with our decision and we understand that, We have to make the best decision looking at this case as we evaluate any other case and go where the evidence leads us."

ABC11 spoke with Denkins' mother, Rolanda Byrd, as she left the district attorney's office Tuesday with her family by her side.

She said that she was hoping for a different outcome, but not surprised.

Byrd said she's not giving up - stating that she may explore other legal action.

The pastor who officiated Denkins' funeral was also there and urged the community to be calm and prayerful.