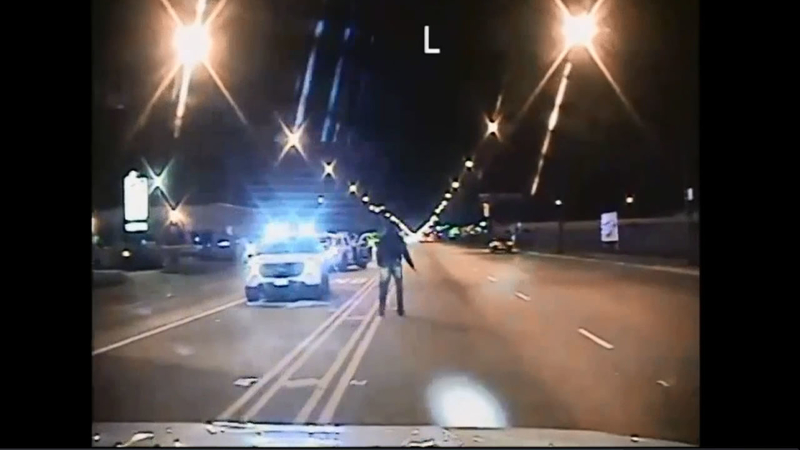 CHICAGO -- Protesters took to the streets Tuesday evening in the wake of the release of dash cam footage showing police shooting a teen being shot by police, chanting "16 shots" for the number of times the officer allegedly shot him.

The dash cam video, released by police a day ahead of a court-ordered deadline, shows officers confronting 17-year-old Laquan McDonald, who later died at a hospital, as he walked down the street on Oct. 20, 2014.

Chicago police officials said they were responding to a report of a person walking down the street with a knife and that McDonald refused to drop the knife when ordered.

Jason Van Dyke, the police officer who allegedly shot McDonald a total of 16 times in 14 to 15 seconds, was arrested Tuesday and charged with first-degree murder.

There are several instances where puffs of smoke can be seen coming from McDonald's body, as he is on the ground. He was later declared dead at the hospital.

"These clouds of smoke were later identified as clouds of debris caused by fired bullets," according to court documents filed by the State's Attorney's office.

Van Dyke was charged with first degree murder and stripped of his pay and policing powers, police officials said today. He was held without bond.

"It's certainly everyone's right to make a judgment about it but I would just state that the judgment made by individuals who have viewed this tape from the comfort of their living room, on their sofa ... it's not the same," Van Dyke's lawyer, Dan Herbert said.

McDonald's family issued a statement earlier in the day reiterating that they "would prefer" that the video not be made public and urging "calm" when and if it was made public.

Chicago Police Superintendent Garry McCarthy said Van Dyke was stripped of his police powers immediately and was no longer being paid by the department.

"Every day in this city, you see thousands of officers performing admirably and making a difference of the lives of the people of Chicago," McCarthy said.

"We are not the least bit pleased about this."

Mayor Rahm Emanuel echoed McCarthy's sentiments: "This moment does not speak to who we are and what we can become."