Former President Jimmy Carter says he has cancer and will undergo treatment.

AP
ATLANTA -- Former President Jimmy Carter revealed that a recent liver surgery found cancer has spread in his body but gave few details about his prognosis in a brief statement released Wednesday.

"Recent liver surgery revealed that I have cancer that now is in other parts of my body," Carter said in the statement released by the Carter Center. "I will be rearranging my schedule as necessary so I can undergo treatment by physicians at Emory Healthcare."

The statement makes clear that Carter's cancer is widely spread, but not where it originated, or even if that is known at this point. The liver is often a place where cancer spreads and less commonly is the primary source of it. It said further information will be provided when more facts are known, "possibly next week."

Carter, 90, announced on Aug. 3 that he had surgery to remove a small mass from his liver.

"Michelle and I send our best wishes to President Carter for a fast and full recovery." —@POTUS pic.twitter.com/BHfntH0Sh6

"Jimmy, you're as resilient as they come, and along with the rest of America, we are rooting for you," Obama said in a statement.

Carter was the nation's 39th president, defeating Gerald Ford in 1976 with a pledge to always be honest. A number of foreign policy conflicts doomed his bid for a second term, and Carter lost to Ronald Reagan in a landslide.

After leaving the White House, he founded the center in Atlanta in 1982 to promote health care, democracy and other issues globally, often with wife Rosalynn by his side, and won a Nobel Peace Prize in 2002.

He has remained active in recent years, making public appearances at the center's headquarters in Atlanta and traveling overseas, including a May election observation visit to Guyana cut short when Carter developed a bad cold.

Carter also completed a book tour this summer to promote his latest work, "A Full Life."

Carter included his family's history of pancreatic cancer in that memoir, writing that his father, brother and two sisters all died of the disease and said the trend "concerned" the former president's doctors at Emory.

"The National Institutes of Health began to check all members of our family regularly, and my last remaining sibling, Gloria, sixty-four, was diagnosed with pancreatic cancer and died in 1990," Carter wrote. "There was no record of another American family having lost four members to this disease, and since that time I have had regular X-rays, CAT scans, or blood analyses, with hope of early detection if I develop the same symptoms."

Carter wrote that being the only nonsmoker in his family "may have been what led to my longer life."

"There's a lot we don't know," but the first task likely will be determining where the cancer originated, as that can help determine what treatment he may be eligible for, Lichtenfeld said. Sometimes the primary site can't be determined, so genetic analysis of the tumor might be done to see what mutations are driving it and what drugs might target those mutations.

"Given the president's age, any treatments, their potential and their impacts, will undoubtedly be discussed carefully with him and his family," he added.

Age by itself does not preclude successful cancer treatment, said Dr. Lodovico Balducci, a specialist on treating cancer in the elderly at the Moffitt Cancer Center in Tampa. Much depends on the patient's "biological" age versus his actual years, he said.

"A man 90 years old normally would have a life expectancy of two or three years, but Jimmy Carter is probably much younger than that" in terms of his function, Balducci said. "If he tolerated liver surgery I imagine he has a relatively good tolerance" to other treatments that might be tried. For example, Moffitt has developed a scoring system to estimate how well an older person would tolerate chemotherapy, and the risk of serious side effects.

The first task is to determine if the cancer is curable, "which is unlikely with metastatic cancer," or if it is possible to meaningfully prolong the life through further surgery or other treatments, Balducci said. "Cancer in a 90-year-old is a serious problem, but that does not mean a 90-year-old cannot benefit from treatment."

An Emory spokesman declined comment Wednesday. The health care system's Winship Cancer Institute in Atlanta touts its designation as a National Cancer Institute center and a recent U.S. News and World Report ranking among the top 25 cancer programs in the U.S. on its website. 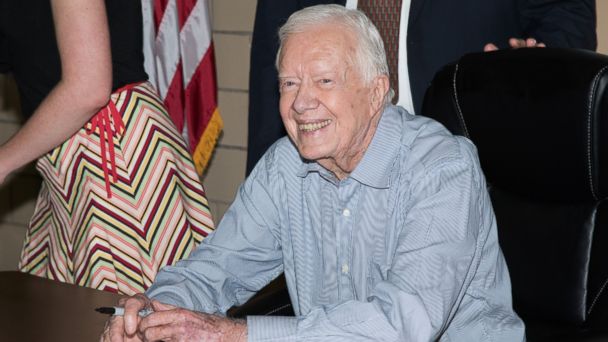