Garner eviction notices called 'an attack on the poor' 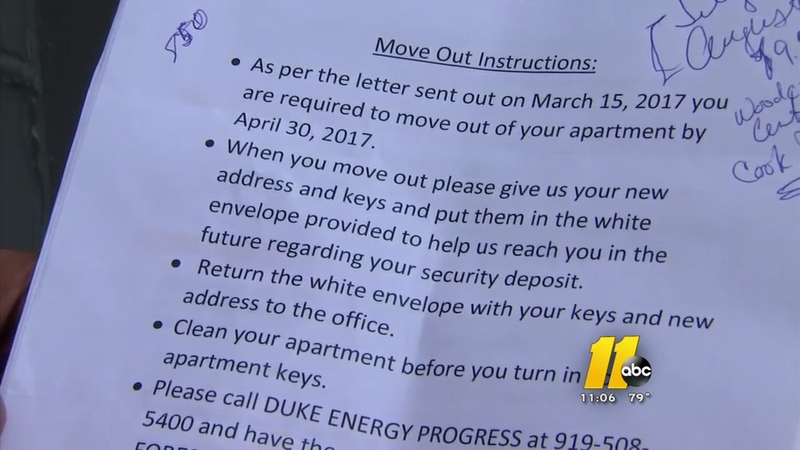 GARNER, North Carolina (WTVD) -- They arrived at Wake Baptist Grove Church, not far from their apartments, still in a state of confusion.

"Just basically devastated; are you kidding me?" said Yolanda Smith. "We're trying to determine what is really going on."

Smith is one the dozens of Forest Hills Apartment residents caught off guard by what they took as preemptive eviction notices. Wake County commissioners were surprised as well.

"The notice on Wednesday was very startling to us, too," said Wake County Board of Commissioners Vice-Chair Matt Calabria.

The notices were placed on residents' apartment doors on Thursday by staffers at Eller Capital Partners, the complex's new owners, informing many of these low-income residents they have to move by this Sunday.

The letters sent shockwaves, especially since county leaders thought they struck a deal with Eller last month to give residents until June 15 to try to find a new place to live.

When contacted by ABC11, Eller Capital said it only agreed not to "forcibly" remove residents by June 15.

"I think it's just cruel and vindictive. I think they're on an attack on the poor," said community activist Octavia Rainey.

County commissioners, a Garner town councilor and the town manager all attended the community meeting at Wake Baptist. And residents got another dose of hope.

"Your landlord cannot evict you," George Hausen told the audience. Hausen is the executive director of Legal Aid of North Carolina.

Hausen informed residents of their fair housing rights. He says for years Forest Hills' previous owner was entered in a tax credit deal with the federal government to provide low-income housing. That deal was canceled when the property went into foreclosure in 2015. But Hausen argues Eller Capital still has a legal obligation towards those low-income residents for 3 years following the foreclosure.

"So my reading of that is that the foreclosure took place in February 2015, I think there's a strong legal argument that says you have a right to maintain your tenancy until February of 2018," Hausen said.

Hausen will take that argument to a judge in his effort to block the evictions. In the meantime, he is advising resident to continue to make good faith efforts to pay their rent every month as a legal paper trail they met their commitments.