'Hard' to Keep Kids 'Out of Harm's Way,' Mom Who Scolded Son on Camera Tells Obama 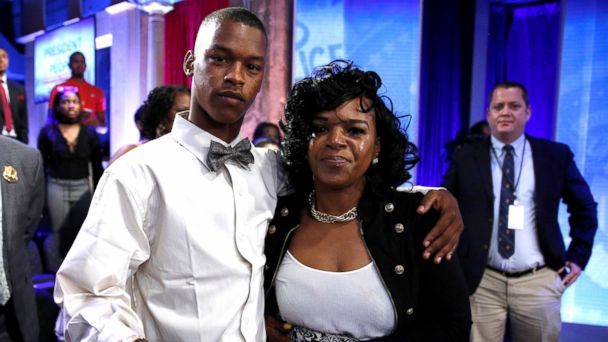 The Baltimore single mom who was captured on camera striking and yelling at her son as he participated in violent demonstrations during the April 2015 Freddie Gray protests asked President Obama today for his advice as she continued to attempt to steer not only her son, but her five daughters as well, in the right direction.

Toya Graham, 44, who attended today's town hall with her son, Michael, said that although she had sent him away because of her own fears for his life, but he has been returning to the neighborhood on weekends.

"So he's right back in the heart of everything," she said during a town hall with the president hosted by ABC News' David Muir. In 2015, Graham said she spotted Michael tossing rocks at police while she was watching TV. Cameras caught her yelling at and grabbing and hitting him.

"It is so hard to keep them out of harm's way when you're trying to, you know, keep a job and do right," said Graham, 44. "What I do understand is the rage that a lot of these [young people] are going through in Baltimore City. I've seen a lot. ... Whether it's with the police department and these young black men or just the men killing the men. ... I have to work as a single mother. What can I do?"

Obama, who was raised by a single mother, said that parents like Graham needed support in their communities to enforce what they were trying to teach at home.

Obama said that a conversation needed to continue in the US about issues like early childhood education, high-quality daycare and after-school programs as well as making sure that schools had sports and music programs.

"There are a lot of schools now where there's just not much there for kids," he said. "You need to have a community that is reinforcing the values that you're teaching and that provides you some basic support.