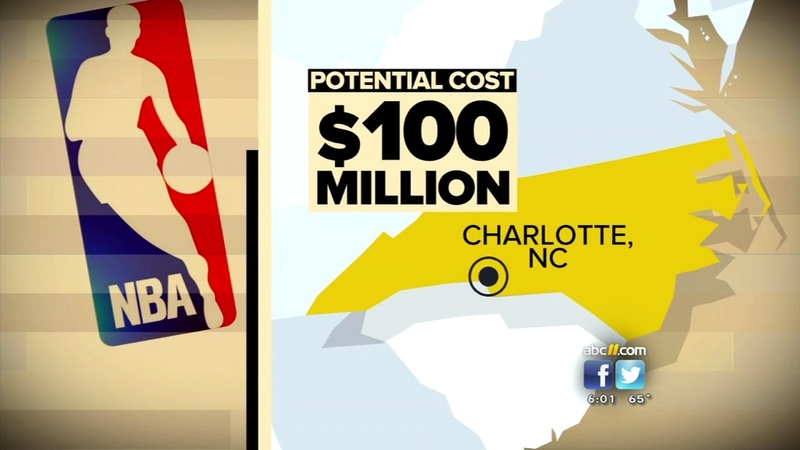 NBA commissioner Adam Silver said Friday that, although House Bill 2 is problematic for the league, the 2017 All-Star Game is still set for Charlotte.

Silver says, the law in NC is "problematic" for the league. pic.twitter.com/hSXjaizOnQ

The Tar Heel State has been embroiled in controversy since Republican Gov. Pat McCrory signed House Bill 2 into law last month, an ordinance that banned people from using bathrooms that don't match the sex indicated on their birth certificate.

Feeling the pressure on and off the court, the league has been asked to move the game from Charlotte amid the backlash. Silver told NBA owners and members of the media that the league is against discrimination of any kind, and hopes the NBA can work with lawmakers to "effect change."

It appears the league is using the sporting event as leverage.

"If we were to announce were moving our All-Star now, I'm not sure what incentive would be left for legislators to change the law," he said. "There's an appropriate voice for us to have in this conversation and that we can be a force to work towards constructive change."

Silver said he wasn't sure he even understands the argument behind the law.

"I frankly am not even sure I understand the genesis of this law. I'm don't understanding why the Legislature felt the need for this law. And I'm very concerned about singling out any minority group," he said.

A reporter asked Silver point blank if a decision had been made about moving the All-Star Game. Silver skirted the question, simply restating that HB2 is problematic for the league, but they are not going to make any announcement about moving the much-anticipated event.

"The league believes that these groups need to be protected, but again I think the right way to work toward the proper resolution here is for the league to remain engaged in the conversation rather than setting ultimatums or announcing we're not going to play our all star game in Charlotte," Silver said. "It would be easy, in a way, to grandstand here and announce 'we're moving the All-Star Game,' even though that All-Star Game is not schedule to take place for ten months."

Silver, no votes were taken today on the All Star Game in Charlotte. Owners were united against discrimination of any minority group.

Silver said it would send a very confusing message to the Charlotte team and fans everywhere if they pull the game, but the team remains there doing business.

"As a black person, I'm against any form of discrimination -- against whites, Hispanics, gays, lesbians, however you want to phrase it," Barkley told CNN last week. "I think the NBA should move the All-Star Game from Charlotte."

The NBA issued the following statement after Friday's news conference:

"During a media availability earlier today following the NBA's Board of Governors meeting, Commissioner Adam Silver clarified that the NBA remains deeply concerned about its ability to successfully host the 2017 All-Star Game in Charlotte, North Carolina, in light of recent legislation that discriminates against the LGBT community. At no time did Adam affirm that the league would not move the All-Star Game; rather he stressed repeatedly that the legislation is problematic, that we feel it is best to engage with the community to work towards a solution, that change is needed and we are hopeful that it will occur."

The band Mumford and Sons played in Charlotte Thursday night and said they would be creating a charitable fund to support those who "make it their mission to pursue love and justice." The group also said they would be donating to a local LGBT organization.

Bruce Springsteen canceled his tour stop earlier this month, and Ringo Starr pulled out his show set for June. Cirque du Soleil announced Friday it would also cancel all performances in North Carolina.

A bipartisan group of U.S. senators wrote to Silver earlier this week urging the organization to "take a stand" and move the All-Star Game away from Charlotte.

Silver called the law "deeply concerning" and said he hoped the situation would be resolved soon.

It comes as Atlanta city leaders asked the NBA last month to consider moving the All-Star Game their way from the Queen City.

Earlier this week, McCrory filed an executive order that extended further protections to state employees based on sexual orientation and gender identity, but left the bulk of the law intact.