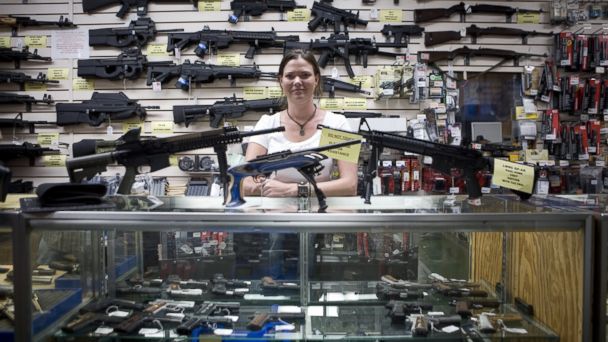 A majority of Americans oppose banning assault weapons for the first time in more than 20 years of ABC News/Washington Post polls, with the public expressing vast doubt that the authorities can prevent "lone wolf" terrorist attacks and a substantial sense that armed citizens can help.

Just 45 percent in this national survey favor an assault weapons ban, down 11 percentage points from an ABC/Post poll in 2013 and down from a peak of 80 percent in 1994. Fifty-three percent oppose such a ban, the most on record.

Indeed, while the division is a close one, Americans by 47-42 percent think that encouraging more people to carry guns legally is a better response to terrorism than enacting stricter gun control laws. Divisions across groups are vast, underscoring the nation's gulf on gun issues.

Personal fears about being victimized by a terrorist attack is not up -- it's 42 percent now, vs. 49 percent in a Gallup poll last summer. But views on the government's limitations, and on arming citizens, relate strongly to attitudes on banning assault weapons. Consider:

The results of this survey, produced for ABC by Langer Research Associates, point to a shift away from the position favored by Barack Obama and others who responded to the recent attack in San Bernadino, California, by calling for stricter gun control measures. Notably, in a statistical analysis, Obama's overall job approval rating is the single strongest factor in views on an assault weapons ban.

Change/GroupsThe increase in opposition to banning assault weapons since 2013 peaks in some groups -- up 18 points among strong conservatives, 17 points among higher-income earners and 16 points in the generally more liberal Northeast. But it's a broadly based trend. Many groups have moved from majority support for an assault weapons ban two years ago to majority opposition now: whites, 30- to 64-year-olds, suburbanites, political independents, moderates, residents of the West and Midwest, anyone without a post-graduate degree and those in $100,000-plus households.

Differences among groups are extensive. Barely more than a third of men favor banning assault weapons, compared with more than half of women (35 percent vs. 53 percent). Seniors are most likely to favor banning assault weapons, while - despite their greater liberalism on many other issues - nearly six in 10 young adults oppose it. Opposition is high in rural areas (64 percent) and among those who lack a college degree.

Group differences on responses to terrorism generally are similar to these, if less sharp. One that stands out is the extent of worry people have about being victimized: Those who are less worried divided evenly between favoring stricter gun control or encouraging more people to carry guns legally. Those who are most worried about being a victim of terrorism, by contrast, favor encouraging more people to carry guns, by more than a 2-1 margin.

MethodologyThis ABC News/Washington Post poll was conducted by landline and cellular telephone Dec. 10-13, 2015, in English and Spanish, among a random national sample of 1,002 adults. Results have a margin of sampling error of 3.5 points, including the design effect. Partisan divisions are 33-23-34 percent, Democrats-Republicans-independents.

The survey was produced for ABC News by Langer Research Associates of New York, N.Y., with sampling, data collection and tabulation by Abt-SRBI of New York, N.Y. See details on the survey's methodology here.