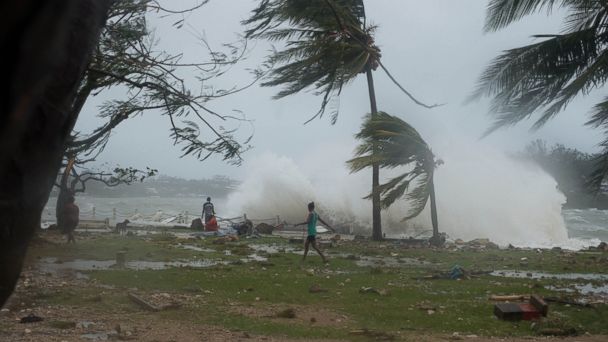 "We're extremely concerned for [the] safety and well being of tens of thousands of people across Vanuatu," the Australian Red Cross said in a statement. "Humanitarian needs will be enormous. Many people have lost their homes. Shelter, food and water [are] urgent priorities."

The storm uprooted trees, blew roofs from homes and downed power lines across Port Vila. Chloe Morrison, a World Vision emergency communications officer who is in Port Vila, said there is no power or running water in the capital and that communication remains unreliable.

"It's still really quite dangerous outside. Most people are still hunkering down," she said. "The damage is quite extensive in Port Vila but there are so many more vulnerable islands. I can't even imagine what it's like in those vulnerable communities."

U.N. Secretary General Ban Ki-moon said the impact of the disaster wasn't yet clear, but he feared the damage and destruction could be widespread.

"We hope the loss of life will be minimal," he said during a World Conference on Disaster Risk and Reduction in Japan.

Ban said he had met the president of Vanuatu, Baldwin Lonsdale, who is attending the conference, and expressed the U.N.'s condolences and solidarity. The U.N. said it was preparing to deploy emergency rapid response units.

Located about a quarter of the way from Australia to Hawaii, Vanuatu has a population of 267,000 spread over 65 islands. About 47,000 people live in the capital.