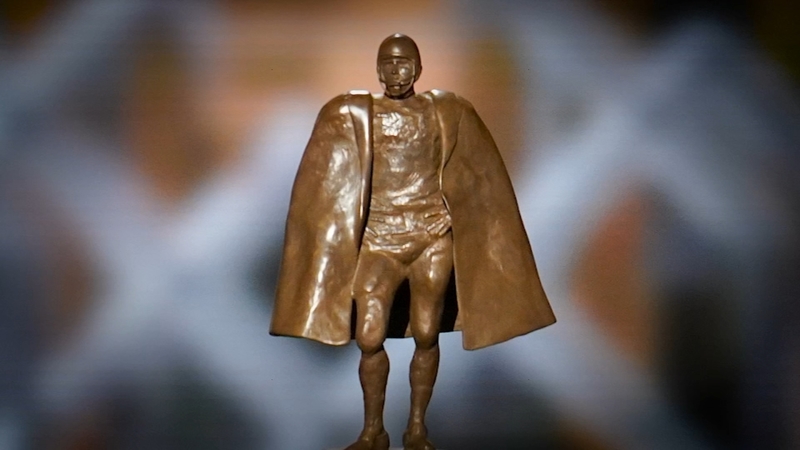 There are more than a dozen NFL awards handed out each year and one of the most prestigious is the Walter Payton NFL Man of the Year award, which recognizes a player's service to his community as well as his excellence on the field.

This year, on the 50th anniversary of the award, its meaning takes on a new significance because of the many challenges 2020 brought.

"He was really just dad," Brittney Payton, Walter's daughter recalled. "You never knew coming home if he was going to be jumping out behind a closet door or something just to scare you, but he just really was such a kind person."

Payton, the Chicago Bears' Hall of Fame running back, embodied what it means to be a Man of the Year -- so much so that in 1999, the League renamed the award to honor his legacy.

"I think my dad always thought that his foundation and the work that he did in giving back and helping others would be a part of his greatest legacy, and it truly is," Brittney Payton said. "It has continued on each year. Seeing this award and the magnitude of it and how it continues to grow and grow."

Anna Isaacson, who works for the NFL, said she is inspired by the value players place on winning the award and following in the footsteps of past honorees.

"How players think about Walter Payton and the honor they feel to be in that company," Isaacson said. "The honor that players feel to be named alongside the 50 previous winners and what that means to them, the legacy, the history. It's inspiring. It has driven me and our team to want to continue to elevate this platform."

Isaacson said that as the award evolves, it carries more meaning -- especially in 2020, a year that brought a global pandemic and a national conversation around social justice.

Brittney Payton agreed with that assessment.

"2020 was the year of change," she said. "Everyone has had to pivot and learn how to do things differently. Unfortunately, you can't be as hands-on and be one-on-one but they're still figuring out the ways of where they can help where it's needed. That's been amazing ... there's so much going on, but they still take the time out to make sure they can continue to champion these causes."

One of those players who stepped up is Carolina Panthers nominee Shaq Thompson. The linebacker recorded 114 total tackles for the season but his off-field contributions were even more impressive. He helped those struggling during the COVID-19 pandemic, marched for social justice and created the Thompson Legacy Fund.

"My mom, we didn't have a lot of money growing up. My mom used to do stuff like that and just letting people cook for people, letting people stay over when they had nowhere to go," Thompson added. "Seeing that as giving back, opening up her arms. Once she passed away, I kind of just found my purpose of why I'm here and what I need to use this money for instead of just myself and my family. There's a need for others. Others' needs need to be met and helped and situations. That's what my heart went to."

"2020 is a year in which those who have, have to give," Rhule said. "Those who can, have to go do something. When you talk about social injustice, racial injustice I think of our nominee Shaq went out and protested. He didn't just talk about it he went to go be about it and work at it."

Former Carolina Panther Thomas Davis won the Man of the Year award in 2014, and he remembers Thompson coming to his events, where Davis helped show him the ropes. Davis said it is exciting to see guys around him become just as passionate about giving back as he is.

"I am extremely proud to see Shaq step up and kind of take over some of the things that we were doing in the community," Davis said. "Just knowing that he's decided to start his own foundation, that he's giving back, making an impact in the community. It means the world to me knowing that somewhere along the way, I could have possibly contributed to him wanting to do that."

As the award grows, so does the friendly competition between players and the desire to do more good. Players see it as a way for the NFL to humanize them and shine light on what they're doing in their communities.

"It's extremely important because in the media so often, all you see about NFL players is the negative stuff," Davis said. "It's all that's being reported. This award is one that definitely stops you in your tracks as a player because you know that it's the biggest honor that you could possibly receive, to me, in this league."

Isaacson noted that the award helps remind fans that players are more than jersey numbers and statistics.

"Our players are individuals and need to not be painted with a brush that paints them under a light that they don't deserve to be under," Isaacson said. "When you see the Man of the Year nominees and the previous winners together, you really start to believe that, and you fight for it."

Each year, when the nominees roll in, Brittney Payton is reminded of the path her father paved and the opportunity for NFL players to not only shine on Sundays but every day and to use their platforms for good.

"I know he would be so proud," Brittney Payton said. "It's truly an honor, and he would be so humbled and proud of the work that these men are doing. I know if he were here, he would be out doing the work that he does and helping to champion these guys, too and their causes to lift them up in their platforms, so they can continue going out and doing good in their communities."

The award winner will be announced Saturday night and receive $250,000 to a charity of their choice. The other 31 nominees will get up to $40,000 for a charity of their choice.
Report a correction or typo
Related topics:
sportscharlottenccarolina pantherscommunity servicenflspirit of givingawardgood sports
Copyright © 2021 WTVD-TV. All Rights Reserved.
TOP STORIES
Mark Meadows to halt cooperation with January 6 committee
Amber Alert issued for 1-year-old Randolph County girl
Everyone should get tested prior to indoor gatherings, CDC says
Toyota to build lithium battery plant in NC
50 mutations in omicron could be its downfall, data shows
Why feds are warning it could take months to get a passport
Show More
Raleigh Police plan to crack down on speeding drivers
This day in history: Pearl Harbor attacked
CEO of American Airlines retiring
Durham, Zebulon make political history with new mayors
NC unemployment improving but businesses still struggle to hire
More TOP STORIES News