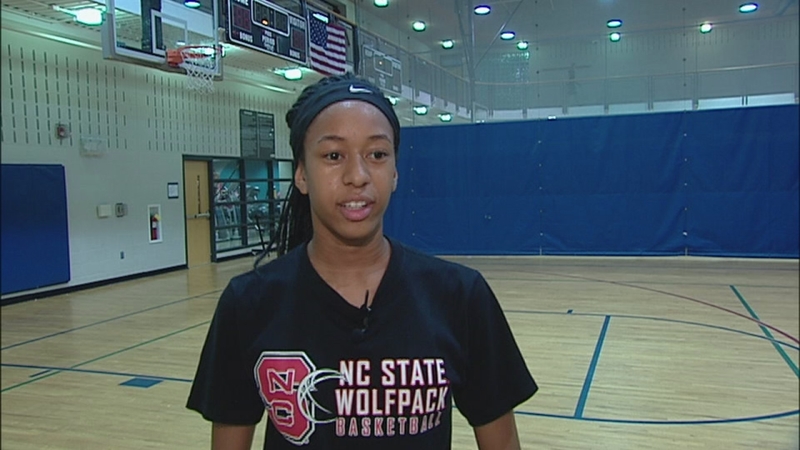 RALEIGH (WTVD) -- Most Wakefield Middle school students will swap stories about summer vacations, teenage crushes or braces when they head back to school this month.

Their classmate, Jada Peebles, though, had the most "OMG" moment of them all.

"It was really shocking because I didn't think that it could actually happen," she said.

The 13-year-old received a college basketball offer from her dream school, N.C. State University, and she has yet to start eighth grade.

"It was a little hard to process and a little surreal," said Danny Peebles, her father and a former two-sport Wolfpack star athlete, "but they let us know that it was really real, and they were really interested in her coming over."

Jada was raised a Wolfpack fan. After all, both of her parents attended the university, and she has participated in summer camps at the school since she was younger. So it was a slam dunk when it came to making her decision.

But is she too young? That's the question that the teen hoopster will most likely face.

"I think for her she's mature enough to make that decision," Danny said. "We told her that we support her with whatever direction she wanted to take."

The direction was one already walked by her favorite player. Jada credits her basketball idol, Tulsa Shock guard Skylar Diggins, for helping her make this decision.

"She's really good, and she's, like, a good shooter like me, and I kind of like to compare myself to her and want the same game as her," said Jada.

"Skylar Diggins, who played at Notre Dame, committed to Notre Dame in the eighth grade, and she was from the town that Notre Dame is in, so it's a similar story," Danny said.

For now, though, Jada continues to be humble.

"I don't think this will change my game," she said. "I still think I need to work on it."

She is also excited about her upcoming middle school season.

"I think that there's, like, a target on me now knowing that I'm going to N.C. State," she said. "People might think that they're better than me so they're going to go even harder. I like to be challenged, and a good challenge is good for me."

Her father agrees, but also stands on the sidelines as a proud parent, while watching his daughter achieve her dream.