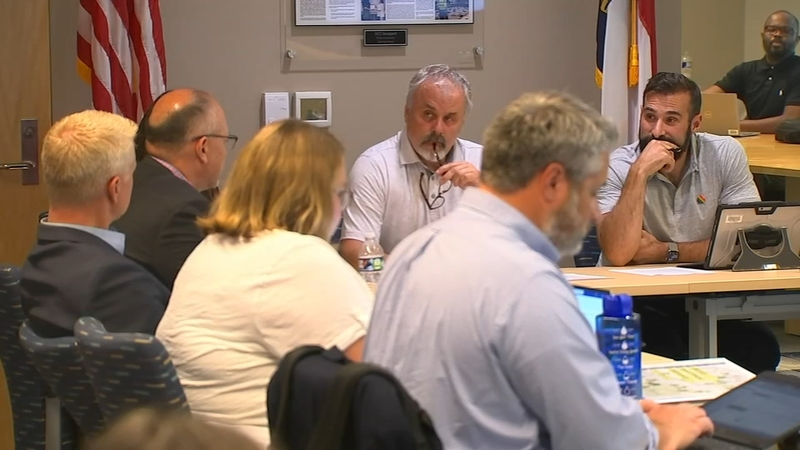 HOLLY SPRINGS, N.C. (WTVD) -- Zara Collier and Haley Hardcastle walked out of a Holly Springs Town Council workshop on Tuesday night with their heads held as high as could be.

"I would say a little disappointed but it's as expected when you see this happening over and over again," said Collier, president of the Gay-Straight Alliance at Holly Springs High School.

"We kind of knew that's how this would end," said Hardcastle, a rising senior at the high school.

They sat inside the Holly Springs Law Enforcement center as the town council talked for two hours and ultimately decided not to sign on to Wake County's non-discrimination ordinance.

Dozens of activists rallied prior to the meeting as they urged the council to pass the NDO and a proclamation for Pride Month. The proclamation never made it through the doors.

"I'm frustrated, to say the least, and sort of not protected," said Donna Friend. "If Wake County spent the money to hire some of the best attorneys, they've got to craft an ordinance that should be good for everybody and cover everybody, so why not Holly Springs?"

Councilmembers pressed the town's attorney but ultimately most concluded they didn't have enough data to vote on the ordinance.

"We are open to change, we're open to inclusion and we're open to diversity but let's make it right for the town, for Holly Springs," said Councilman Timothy Forrest.

The town can still pass an ordinance itself but signing on to the county's would be free. The town's attorney agreed that doing it was low-risk and low-cost

The ordinance was passed by the county last October but advocates say they believe the discussion has been delayed by town council members.

"All we're doing by deciding not to sign on is choosing not to protect our citizens with the same accommodations that they have in Apex, towns like Cary, Raleigh and other parts of the county," said Aaron Wolff, the only councilmember arguing for the town to pass the ordinance.

Wake County commissioners said Cary is soon to sign on to the ordinance. It means Holly Springs, Fuquay Varina, Zebulon and Wake Forest will be the only ones not to adopt it.