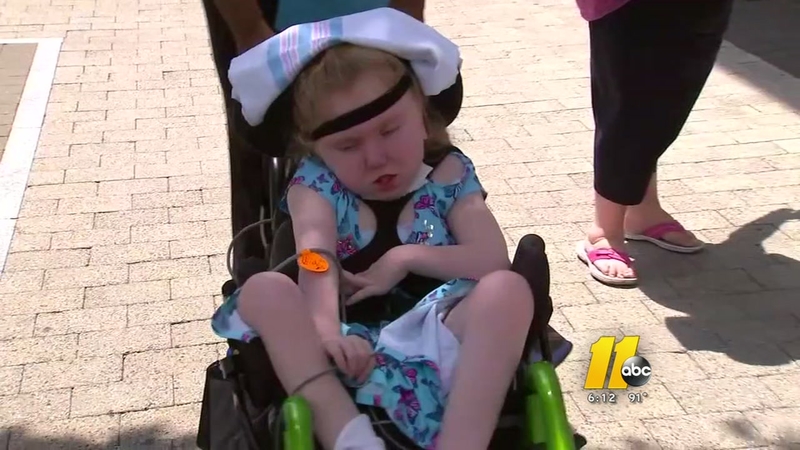 Pastor James Brigman pushed his daughter, Lauren, in her wheelchair across a bridge into the nation's capital just after sunrise.

"She led the way, and that just made it all worth it," he said. "People took me into their home, they fed me. It was difficult at times, but it really didn't matter."

Brigman is protesting potential cuts to Medicaid as lawmakers debate how to repeal and replace Obamacare.

Republican leaders say the Senate will vote Tuesday on their health-care legislation.

They have postponed votes twice because too many Republicans were poised to vote no. That could happen again, although GOP leaders say they are very close to a compromise.

The NC pastor walking to D.C. for his daughter has arrived, meeting w/ @SenatorBurr's staff this morning https://t.co/aIxxAexsHO #abc11 pic.twitter.com/yqHjbnb2VL

Brigman met with Sen. Richard Burr's and Sen. Thom Tillis' staffs Monday and plans to meet with other lawmakers throughout the week.

He began his journey July 7 from Rockingham.

His 9-year-old daughter, Lauren, was born with a rare disease that confines her to feeding tubes.

She requires constant nursing care and receives help from North Carolina's Community Alternatives Program for Children (CAP/C). It pays for the state's sickest children to get care in the comfort of their own home that private insurance does not cover, and it has kept Lauren alive since she was born.

Though CAP/C is not identified for cuts in the Senate health care plan, deep cuts to Medicaid spending could force state and health officials and state lawmakers to slash funding and services to the state's nearly 2,400 medically fragile children.

About 142,000 North Carolina children are in danger of losing coverage altogether, according to the Urban Institute.

"Senator Tillis strongly believes that we must protect and provide for the most vulnerable in our state, which includes medically fragile children who require specialized care. The safety net that the CAP/C program provides needs to be there for them," said Adam Webb, a spokesperson for Sen. Tillis' office.