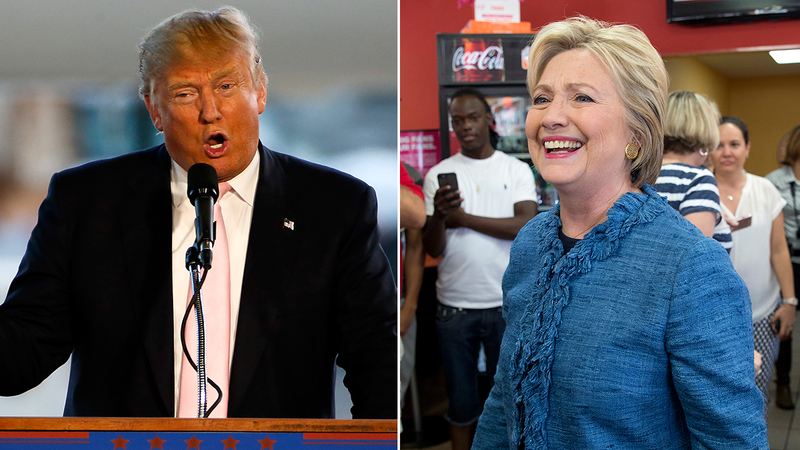 On the Republican side, Ted Cruz was the runner up in partial, unofficial results. Trump's win strengthened his chances to secure the Republican presidential nomination. Cruz is hoping to pick up enough delegates to force a contested national GOP convention in July.

Trump said Tuesday during a victory rally at his Mar-a-Lago home in Florida that "something is happening" in the Republican Party that is being noticed "all over the world."

He touted increased voter turnout and a rise in new voters who have come out to support him. Trump also won in Florida and Illinois, while Ohio Gov. John Kasich won in his home state.

On the Democrat side, Clinton's win extends her list of victories in the South over rival Bernie Sanders. Her win in North Carolina was her second victory on Tuesday, following a triumph in Florida and then Ohio.

"We are moving closer to securing the Democratic Party nomination and winning this election in November," Clinton told cheering supporters in Florida, calling it "another Super Tuesday for our campaign."

She has a significant delegate lead over Sanders, who has turned in stronger showings in the Midwest and other Western states.

In the presidential contest, North Carolina Democrats will distribute to party presidential candidates 107 convention delegates and state Republicans will allocate 72 delegates based on the primary results. Both state parties allocate their delegates proportionally, either based on results by congressional districts or statewide. Libertarians also hold a presidential primary, although delegates aren't apportioned based on the results.

North Carolina's hefty cache of delegates drew both front-runners to multiple appearances ahead of the vote, stoking voter enthusiasm.

"I'm ready for the first woman president," said Clinton supporter Ashley Wilson Brook in Raleigh. "She has America's future at stake and at heart, and echoes all my beliefs. She believes in climate change. She wants women's rights. She does not want to take us back. She wants to take us forward."

North Carolina will also be considered a key battleground state in the general election. President Barack Obama won the state in 2008 but lost it to Mitt Romney four years later.

Some North Carolina precincts saw long lines Tuesday. The State Board of Elections allowed polls in two counties to stay open an extra 30 minutes because of problems earlier in the day.

Election officials said turnout was steady across the state the entire day.