Obama says US, France must destroy IS together 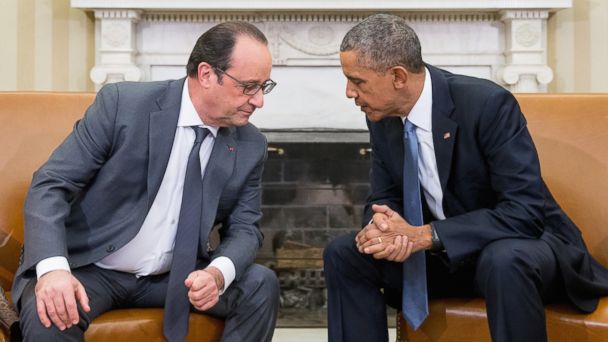 WASHINGTON -- President Barack Obama says the Islamic State group cannot be tolerated and must be destroyed. He says the U.S. and France must destroy it together.


Obama is speaking after an Oval Office meeting with French President Francois Hollande (frahn-SWAH' oh-LAWND'). Obama says he and Hollande agreed the nations in the U.S.-led coalition must do more together to fight the Islamic State.

Pres. Obama on ISIS: "It cannot be tolerated. It must be destroyed and we will do it together." pic.twitter.com/6XqPCU7wdE

Obama is calling it a "barbaric terrorist group." He says this is an important moment for the U.S. and France as well as the rest of the world.

Obama is declaring "total solidarity" with France and pledging to bring justice to the perpetrators and the people who sent them. Obama says the U.S. and France together will "defend out nations."

The president also says the attacks that killed 130 in Paris was an attack on the world itself.

President Obama: 'We cannot and we will not succumb to fear.' pic.twitter.com/h2ACoMi4SI