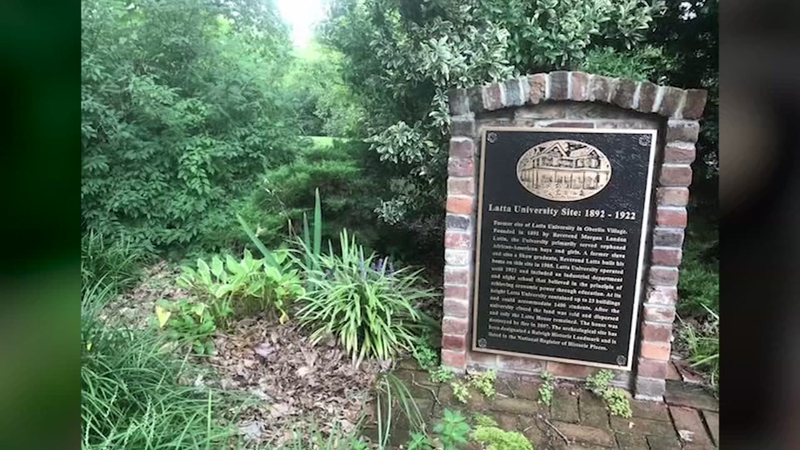 Nestled in Oberlin Village sits a small patch of unassuming greenery currently used as a neighborhood park. Residents use it for morning yoga, community cookouts, and quiet evening walks. You'd never guess it used to be part of a university attended by men and women freed from slavery on Raleigh-area plantations.

The last remnant of Latta University burned down in 2007, when the Latta House went up in flames. Rev. M.L. Latta was a slave on the Cameron Plantation, which comprised much of the land in and around the Cameron Village and Cameron Park areas of downtown Raleigh. When he was freed, he earned an education at Shaw University and established Latta University in Oberlin Village.

In those days, the area had several plantations, including the Cameron, Stagsville, and Mordecai estates.

When slavery was abolished in 1865, thousands of freed men and women were faced with an uncertain future. They needed property, education, and jobs. Leaders in the freed community rose up and formed churches, bought land, and established educational structures, empowering freed people throughout Raleigh.

"The first thing those people did is walk away from the plantation immediately just because they could!" explained Douglas Porter, Historic Sites Program Director for the City of Raleigh. "But within a few weeks, they often found themselves gravitating back towards the plantation again because they had no money. They'd go to Mordecai Plantation and work as sharecroppers, save their wages and raise money to pull together with kin and buy land."

In the late 1800's and early 1900's, people of color were not allowed to live in the "white neighborhoods," even as suburbs began sprouting around the city. Freedmen's villages popped up around the Raleigh city limits, including communities like Oberlin and Method. Oberlin became a fully independent village. With the help of the Freedmen's Bureau and churches like Wilson Temple United Methodist, men and women with no money or property were able to establish themselves with jobs, education, and land ownership.

Oberlin Village was built on the land of Lewis Peck, who sold parcels of his land to newly freed people. Originally known as "Peck's Place," it was officially founded as Oberlin Village when James H. Harris, who had also once been a slave, purchased most of the remaining land from Peck. Harris, who went to Oberlin College in Ohio, eventually became a City Commissioner for Raleigh, as well as a state senator.

"Black-owned businesses in skilled trades began thriving in Oberlin Village," Porter said. Meanwhile, all around the Raleigh area, freed communities began growing and establishing educational systems. With Shaw University opening in 1865 and St. Augustine University in 1867, Raleigh was becoming a leader in education for African-Americans.

"There were numerous buildings, teaching blacksmithing, bricklaying, and agricultural work," Porter added. "An archaeology dig revealed remnants of some of the industrial classes." Relics like old bricks and horseshoes have been discovered around the land where the university once stood.

"The university closed approximately 1920, but Latta's family continued to live for a while."

Until it burned down unexpectedly in 2007, the Latta House remained a vibrant part of the neighborhood, mostly due to the efforts of caretaker Bill Shepherd.

Dawn Leonard, who moved across from the Latta House in 2004, remembers enjoying musical nights beneath the stars in Latta's backyard. Shepherd was a passionate musician and believed in the power of music to bring communities together. He'd host reggae nights. "From 4 p.m. until dark, people would bring lawn chairs, dogs, grills. Hundreds of people would show up."

The Latta house still had a lot of life, and plans were in the works to preserve it.

Leonard remembers the night of the fire. "I woke up late at night to the sound of blaring fire trucks. It was so sad watching that piece of history burn down."

But even as a quiet park, she says, "This place has a really good energy. It's got a soul."

In the spirit of keeping history alive, the City of Raleigh is hosting the Oberlin Festival at Latta on Saturday, September 22 from Noon until 4 p.m. "This used to be such a lively site, and a substantial piece of Raleigh history," shares Katheryn Neuhart, the Curator of Exhibit Design for the City of Raleigh. "Now, Latta University is not a household name."

Since burning down, there's a very real chance of this piece of history fading away from the public eye.

In fact, Oberlin Village has been fighting to maintain its culture and history for decades. When Oberlin Village was incorporated into the City of Raleigh's city limits in the 1920's, it dealt a terrible blow to Latta University and the community at large.

According to the Wake County Deed Book and the National Historic Registration Nomination form for Oberlin Village, "The 1922 annexation of Oberlin by Raleigh proved to be an unfortunate occurrence for the village despite the added city services. The increased tax levies became a heavy burden for citizens who had been struggling to gain an economic foothold. Just as Latta University had fallen victim to harder times, the citizens of Oberlin faced serious economic problems during the Depression."

The Friends of Oberlin Village have been fighting to keep its history alive as Raleigh grows and developers keep building over pieces of history.

"Did you know, for example, that if you were to drive through Oberlin Village in the early 1900's the street names were different? Emancipation Alley was right near where Harris Teeter is today. Lincoln Way was another street name, now missing from our map," shares Porter.

Porter and Neuhart hope Saturday's event will keep the spirit and history of Latta University and Oberlin Village alive and well in Raleigh.

"We'll be providing historic tours of the Oberlin neighborhood and cemetery. The choir from Wilson Temple United Methodist Church, the first established church in Oberlin Village, will be singing."

There will even be woodworking, Cowrie shell necklace making, and historic games--all things students or residents may have learned back in the late 1800's in at Latta University.

The Latta House is gone, so Bill Shepherd isn't there to keep the light burning. All that remains is a quiet, small patch of greenery where people walk their dogs and do yoga. History so easily slips away as the city changes.

Let's keep those stories alive as long as we can.