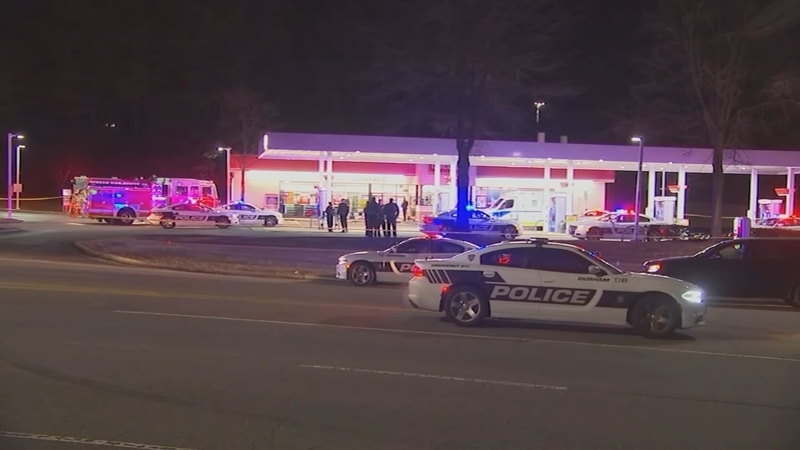 RALEIGH, N.C. (WTVD) -- Bahama, Fayetteville, Raleigh and overnight in Durham. It's been a bloody eight days for local police officers and sheriff's deputies. In each case, law enforcement shot and killed the subject.

"We are seeing clearly an escalation from law enforcement officers of their willingness to use and deploy lethal force," Blagrove said. "That is not to say that that is never warranted. But I think in light of what we've seen over the last two years, it does beg the question: are (police departments) actually hearing and understanding the concerns about de-escalation."

They think a common thread is at play: local law enforcement coming face-to-face with the societal impact of the pandemic.

"What you're seeing is a heavy influx of loss of jobs; individuals suffering from mental-health crisis, which is already being exacerbated by being confined and loss of finances," Pittman said.

In those days and weeks after George Floyd's murder at the hands of police, Pittman and Blagrove marched on the front lines for police reform. Pittman was tapped by Gov. Roy Cooper to sit on a racial equity task force. And he was right there as Cooper signed what was billed as landmark police reform legislation into law

"(Pittman) worked incredibly hard on the governor's task force to try to create and come up with solid recommendations, which they did," Blagrove said. "The problem was that once those recommendations got to the General Assembly, they were watered down."

One policy piece that was ultimately dropped from the bill was a standard use-of-force policy for every police agency in the state to follow and a searchable database with every incident of force by police.

"One was somewhat created but is not made public accessible. So guess what, when depending on the police, they police themselves," Pittman said.

Blagrove added, "(A standard use-of-force policy) is a part of transparency. So that the people who are living in our communities understand what should happen and what the possibilities are for use of force in any given situation."

Blagrove also made the point that these four deadly incidents shine a new light on the call to divert more money away from police to city and county social services, which she says are better equipped to solve some of the root causes of some of these disturbances before they land in the lap of police.
Report a correction or typo
Related topics:
raleighdurhamfayettevilledurham policedeadly shootinguse of forceofficer involved shootingfayetteville police departmentdeputy involved shootingraleigh police
Copyright © 2022 WTVD-TV. All Rights Reserved.
TOP STORIES
Snow likely to stick around due to cold temperatures
Aerial views of Triangle area covered in snow
Slick roads found across central NC
Truck with 100 monkeys crashes, 1 still on the loose, police say
Booster shots needed against omicron, CDC studies show
How to make snow cream
Delta flight slides off taxiway after landing at RDU
Show More
Anti-mask parent threatens to bring guns to school: 'Loaded and ready'
Laundrie claimed responsibility for Petito's death in notebook: FBI
2 NYPD officers shot, 1 fatally, responding to domestic violence call
Person struck by vehicle on Western Blvd in Raleigh
City, county governments close services as wintry weather hits NC
More TOP STORIES News