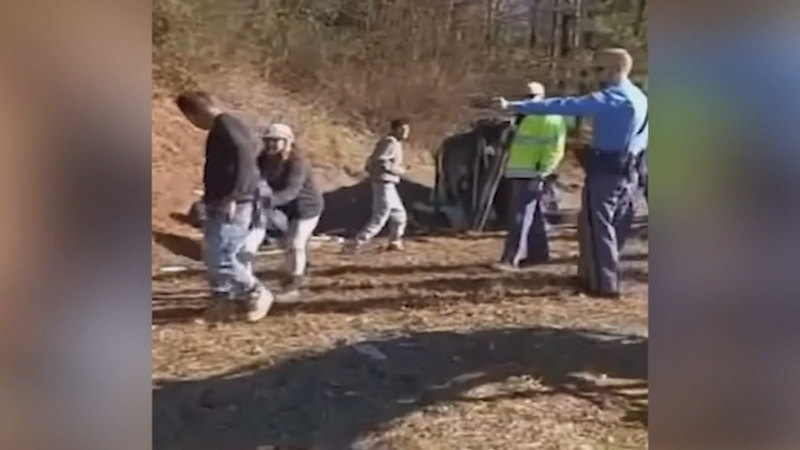 Driver shot by police after I-440 incident dies

RALEIGH, N.C. (WTVD) -- The man shot by Raleigh police officers on Interstate 440 has died from his injuries.

The incident began with a rollover crash Tuesday around 1:30 p.m. on I-440 westbound between New Bern Avenue and Brentwood Road.

At the scene, officers were told the driver of one of the vehicles was intoxicated. They then saw a man with a knife walking away from the area with a small child.

Raleigh Police Department said officers demanded the man stop and drop the knife, but he refused.

A woman was able to get the child away from the man, and officers decided to use a stun gun on the man to stop him.

"Officers gave him multiple commands to drop the knife," RPD Chief Estella Patterson said. "I'm thankful there was a woman on scene who was able to get that small child away."

Officers then approached the man and tried to take him into custody. However, that's when police said the man started swinging the knife toward officers.

"He started walking away with the knife in his hand, police telling him to put the knife down and they ended up Tasing him, and he fell on the ground and like six officers climbed on top of him," said Steven Valerio, a passing motorist who had stopped to try to help. "He flips over on one of the officers and starts swinging, and that's when the officer, I don't know how many rounds he fired, but that's when he shot him."

One officer opened fire on the man. He was then rushed to the hospital where he died.

Valerio said from talking to other people at the scene, it appears the incident began with a road-rage issue.

The State Bureau of Investigation will investigate the shooting. Raleigh Police will conduct an internal affairs investigation as well.

"I'm asking for the public's patience as we continue to investigate this matter," Patterson said. "I do stress that I want to wait until we have all the information before making any decisions or statements concerning whether the shooting was justified or not justified. We don't have that information at this time."

Social justice activist Kerwin Pittman said Wednesday that he is concerned about a possible language barrier in this and future police interactions.

"Can Raleigh Police Department properly protect and serve the population who can't understand them verbally?" Pittman said, "Clearly, there was a language barrier ... and from talking with individuals who know this individual, his English is very limited."

Patterson said Tuesday that she believes the man did seem to understand what officers were saying.

"We have to think about in a situation like that, is he listening to them or is he listening to Raleigh Police Department commands and not understanding what they're saying," Pittman said. "As well as how far were individuals away that was telling him in Spanish to drop the knife."

"The thought went through my mind. Um, could they have not tased him again? Was it not a multitude of officers on the scene to kind of grab him and kind of secure the knife before he actually was able to swing it again?" Pittman said. "And so, the preservation of life, in my opinion, should always be held to high esteem so we can avoid using deadly force, even if it's justifiable in an eyes of the law. I think it should be avoided."

Hindsight is 20/20. however, a brief video of the incident showed just how quickly the man sprang up from being tased and lunged at officers. It's impossible to say whether police could have deployed another Taser round before the man seriously injured an officer.

"It's great to have this level of transparency finally back from Raleigh Police Department and the chief of police to come out and be transparent with information that she could provide at the time," Pittman said "And in all honesty, it is things like that that will prevent the community from getting into an uproar because now we have transparency and accountability in place. And so I'm very thankful that she came out immediately with details."