Raleigh officer shoots driver armed with knife after crash on I-440, police say 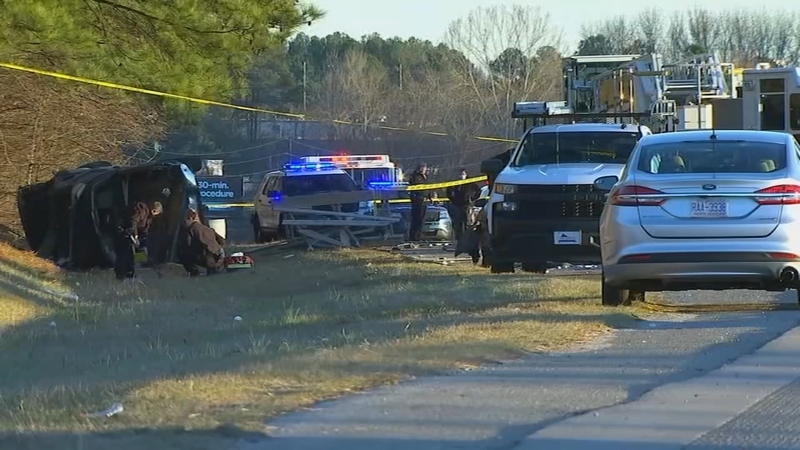 RALEIGH, N.C. (WTVD) -- Raleigh Police are investigating an officer-involved shooting on I-440 westbound between New Bern Avenue and Brentwood Road.

The incident began with a rollover crash on Tuesday afternoon. Westbound lanes of I-440 were closed after the incident happened.

Police responded to the scene of the crash, which involved two vehicles, shortly after 1:30 p.m. and were told the driver of one vehicle was intoxicated.

This is some video I saw of the incident with @raleighpolice on 440. Sources tell me an officer shot someone who came at them with a knife. They had responded to this scene for a crash #abc11 pic.twitter.com/18pxm2Tvaw

Police approached the man suspected of impairment, who was walking away, holding a child and a knife. Police issued multiple commands to the driver to drop the knife.

Raleigh Police Chief Stella Patterson said police used a Taser on the man in an attempt to take him into custody, but he got back up and swung the knife at officers.

That's when he was shot.

"He started walking away with the knife in his hand, police telling him to put the knife down and they ended up Tasing him, and he fell on the ground and like six officers climbed on top of him," said Steven Valerio, a passing motorist who had stopped to try to help. "He flips over on one of the officers and starts swinging, and that's when the officer, I don't know how many rounds he fired, but that's when he shot him."

Valerio said he was only about six feet away from the man's struggle with officers.

"It all happened so fast ... (after being Tasered) he fell immediately, and the officers had half a second to get on top of him and as soon as they got on top of him, he got back up and after the Taser, he was full aggressive mode, and he was swinging at anyone nearby."

RELATED: 'The legal test:' Early analysis of eyewitness video from RPD shooting on I-440

Valerio thought the man had maybe stabbed one of the officers.

"Right after I thought that, I heard a couple of gunshots go off," Valerio said. "And there were about two cops under him when he fired the first shot."

The man's condition has not been released. Patterson said attempts are being made to contact his family.

"Officers gave him multiple commands to drop the knife," Patterson said. "I'm thankful there was a woman on scene who was able to get that small child away."

The child was not harmed.

Valerio said from talking to other people at the scene, it appears the incident began with a road-rage issue.

"The accident was like, you couldn't believe what you saw, I mean it," Valerio told ABC11. "The way the truck was positioned was so crazy. We just started running toward the vehicle. You could see it was smoking. It was probably anti-freeze. You could, you could smell it, but you could see this 2-3-year-old boy."

Valerio said they stopped to see how the boy was doing

"It was calm for about five minutes, then the guy who was driving, and the guy who got shot got into an argument to where the guy started chasing him for a split second but he backed off," Valerio said. "I guess he figured he was going to go to jail or something, and he wasn't happy and he pulled out a knife. Before that, he went to grab his son that the young lady and I were looking after, and he pulled him over to where his other son was, and his mom, and at that point, when other officers pulled up, he wasn't happy anymore. He pulled out a knife, everyone was like put the knife away. It's not worth it.

"The point where officers were most worried is when he grabbed his son," Valerio added. "He grabbed his son in such a violent way, and he still had a knife in his hand it looked like he was about to do something. I don't know, it just looked like the son was in danger."

Congestion remained heavy in the area into the early evening. The right two lanes of I-440 reopened shortly before 7 p.m.

The State Bureau of Investigation will investigate the shooting. Raleigh Police will conduct an internal affairs investigation as well.

"I'm asking for the public's patience as we continue to investigate this matter," Patterson said. "I do stress that I want to wait until we have all the information before making any decisions or statements concerning whether the shooting was justified or not justified. We don't have that information at this time."