'I can't believe it': Former Afghanistan ambassador on evacuation efforts 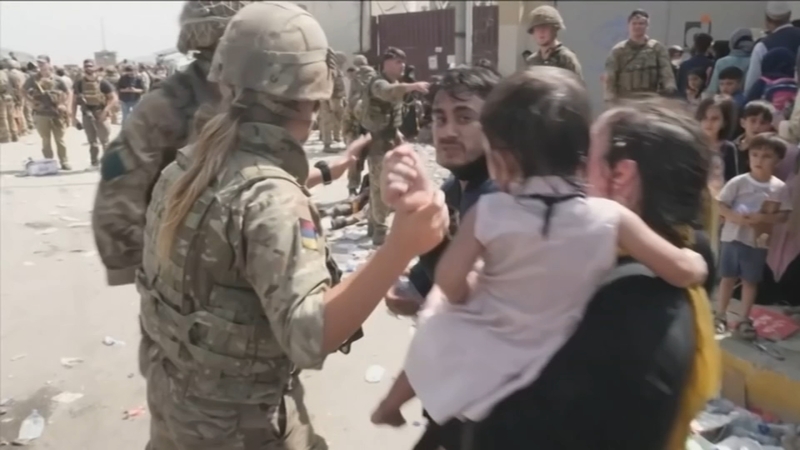 'I can't believe it': Ex-Afghanistan official on evacuation efforts

RALEIGH, N.C. (WTVD) -- As the US continues to try and evacuate Americans and Afghan allies, a new report highlights the looming dangers presented by the Taliban.

The private intelligence report, obtained by ABC News and provided to the United Nations, details Taliban fighters "intensifying" their "hunt-down" of Afghan officials, security forces, and police, going so far as to punish their families if they cannot be located.

The Taliban seized control of Kabul over the past week, following a rapid takeover of other regions of the country.

"I think I'm dreaming. After the twenty years of all these efforts that the United States made, and all these other NATO alliances, all these other friendly countries, and a lot of Afghan-Americans including me. I think I'm dreaming over the past five, six days. And I can't believe it that it could have happened, and it could have left like this," explained Omar Sultan, who previously served as Afghanistan's Deputy Minister of Information and Culture and Ambassador to Greece.

Sultan, who has not been part of the Afghan government since 2018, is a Raleigh resident, who was living in the city prior to working for the government.

"I'm really, really was thinking that I made the biggest mistake of my life to get out of the United States and go back to Kabul, and see after all these efforts, and difficulties that I had in Afghanistan. We built something and now there is nothing left. That made me really, really angry," Sultan expressed.

Over the past two decades, Afghanistan had experienced a number of reforms, most notably in expanded freedoms and opportunities for women. Since reassuming power, the Taliban have been pointedly asked about whether they plan to re-implement strict measures against females in the country; one official said the group would uphold women's rights "according to Islamic law." Still, images of women's faces on storefronts have already been painted over, and many are staying away from work and school out of fear of punishment.

Sultan, a Kabul native, has been closely tracking the developments.

"I always believed that yes -- they should not stay all the time there, American soldiers or NATO, (and) eventually should have (left). But that was chaos to me. To see this situation like this, and in a minute in Kabul," said Sultan, referring to the speed in which the Taliban was able to take power in Afghanistan.

Following a rush to the airport and difficulties in evacuations, the United States sent more troops to the country, including from Fort Bragg. Over the past week, a number of veterans and a bipartisan group of legislators have publicly called for the US to ramp up its efforts in saving Afghans who have received Special Immigrant Visas, which are given to those who worked with or on behalf of the US military.

"Their lives are in danger. Taliban is going house to house," Sultan said.

Sultan believes the US must keep its promises to those visa recipients and their families.

"Otherwise the image of the United States is going to (change). Even now people are shouting that Americans have never been our friends, in Kabul, and at the airport, that they left us without helping us," said Sultan.

With the US's withdrawal from the country, Sultan notes other countries are likely to exert their leverage with the Taliban.

"After we leave, Russia is already putting their influence, Iran already has influence. And China, because of their good relationship with Pakistan, they have a lot of influence in Afghanistan," Sultan said.

Moving forward, he urges the US and its allies to remain vigilant.

"Everyone should be alert, because (the Taliban) are not the people to trust, nor should we trust," Sultan noted.

Last week, ABC11 sat down with Retired Lieutenant Daniel Bolger, who served as Commander of the NATO Training Mission Afghanistan from 2011 to 2013. Now a history professor at NC State, Bolger notes the US will continue to have a large presence in neighboring countries, though he believes they will be cautious about committing further ground troops in the near future.

Sultan, an archaeologist, expressed concern that important artifacts could be destroyed; in 2001, UNESCO confirmed that Taliban rulers had destroyed two 5th century statues of Buddha, describing it as a "crime against culture."

"A nation can stay alive when the history stays alive. Afghanistan and Afghans they are not rich, but they were proud of their culture, heritage, and history. And this is a history that we're only not proud of that, but we can share it with the world. That was my goal when I was the Deputy Minister, I took (exhibits) to the United States, Europe, a lot of other countries," Sultan said.
Report a correction or typo
Related topics:
societyraleighfort braggtalibanafghanistan waru.s. & worldraleigh newsafghanistan
Copyright © 2022 WTVD-TV. All Rights Reserved.
U.S. & WORLD
LIVE: 14 students, 1 teacher dead in TX school shooting, gov says
Senator begs for gun compromise after Texas school shooting: VIDEO
How to talk to kids about Texas school shooting
Father of Texas yoga instructor accused in cyclist's murder speaks out
TOP STORIES
LIVE: 14 students, 1 teacher dead in TX school shooting, gov says
How to talk to kids about Texas school shooting
Johnston Co. dad starts Facebook group to help families find formula
Fort Liberty proposed as new name for Fort Bragg
Ukrainian refugee to receive new prosthetic after escaping to NC
NC Attorney General Stein recovering from 'minor' stroke
Smithfield police officer injured by knife during arrest
Show More
NOAA predicts above average hurricane season, releases storm names
1 dead, brother still missing in Cape Fear River
Eateries struggling as Triangle Restaurant Week approaches
US birth rates rises for first time in 7 years
Report finds people of color pay more in rental application fees
More TOP STORIES News