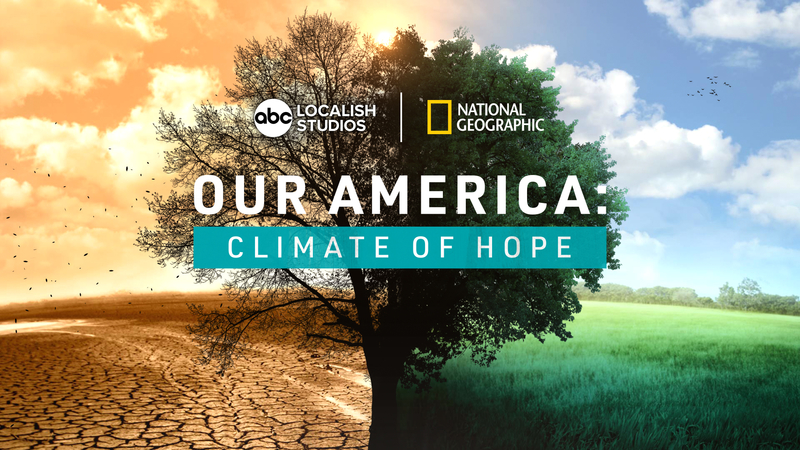 In 2020, the United States experienced more billion-dollar climate disasters than at any time in its history, including the worst wildfire season on record and mudslides over wildfire-scarred hills that collapsed part of the historic Highway 1 near Big Sur on California's coast.

We saw extreme, historic cold and ice in Texas that left millions of people literally in the dark, without power, heat and even clean water. Our cities and communities are living with floods and fire, air pollution and plastic waste. And it's impacting low-income and communities of color the most.

And yet, there are signs of hope.

Our ABC Owned Television Stations meteorologists see not only our climate challenges, but also the solutions that can be deployed today to address the problem. It's the possibility of a future powered by ingenuity, innovation and hope.

In honor of Earth Day, National Geographic Kids editor Allyson Shaw joined meteorologist Cecily Tynan to talk about ways to engage your entire family on the subject of climate change, including fun activities that celebrate nature and can inspire us all to play an active role in helping the planet.
National Geographic has also launched Planet Possible, a multi-year campaign to help inspire people to live more lightly on the planet. Check out the May issue of Nat Geo Kids at natgeo.com/planetpossible for more information on how to help and be sure to use the hashtag #ShareYourSpot on social to help inspire others to join in the action.

When the pandemic kept us off the roads, air pollution as tracked by NASA plummeted. With fewer people in our national forests, wildlife roamed freely at Yellowstone National Park. And some of the biggest corporations committed to a renewable future.

Join ABC Owned Television Stations' meteorologists across the country as they reflect on the changes they have seen in their communities because of extreme weather. With the help of National Geographic projections, they're looking ahead to what their cities could look like in 2070 and sharing how they have changed their lives because of climate change.

Flooding and erosion are one of the biggest challenges our communities face as a result of climate change and the have a disproportionate impact on low-income and communities of color.

Our ABC Owned Television Stations meteorologists are witnessing, in real time, the disappearance of coastlines, and flooding damage in places far from the oceans. See how the changing climate is reshaping life along U.S. coasts and how innovations are already making a difference.
In New York City, for instance, the MTA has developed three main approaches to blocking future floodwaters from flowing into stations through subway entrances. One of them is a system of so called stop logs, interlocking planks that essentially board up entrances to the station.

In Houston, a watertight Starbucks survived the flood waters of Hurricane Harvey. And in San Francisco, officials decided to build a floating fire station to prepare for rising sea levels.

The story of fire in California is two-fold: On one hand, it's about drought and disagreements over the management of dead trees and brush in California's vast forests. On the other, it's millions of people living in what's called the urban-wildland interface. Our America: Climate of Hope examines the increasingly destructive wildfires and the challenges it poses to life, property and public health and spotlights the people helping us adapt to the increasing threat.

Our food systems, including agriculture, land use and methane emissions, mostly from cattle, account for roughly a quarter of our greenhouse gas emissions. Among the solutions to reducing them? A more plant-based diet, with less meat consumption. Our America: Climate of Hope went searching for the most innovative solutions to reduce dependence on animals and water.

And alternative meat burgers like the "Impossible Burger" emit nearly 87 percent less emissions than a ground beef patty and take less water and land to produce.

When it comes to farming, one of the biggest innovations is going back to basics. Regenerative farming is based on a traditional rotation of crops and animals that creates healthy soil that absorbs methane from the atmosphere and creates more nutritious food in the process.

Two ABC journalists got a new perspective about how small changes can make a big impact when they tried a one-week Zero-Waste Challenge. They experimented with changing their shopping habits, their eating habits and even how they stored their produce.

It was harder than expected, but both of them walked away with sustainable ideas of how they can make lasting changes in their consumption habits.

They are the climate leaders of the world of EcoTok, a force of Gen Z activists who campaign for climate actions, sustainability and youth engagement, one TikTok at a time.

Leaders such as Jamie Margolin, the young founder of Zero Hour, discuss how her youth-led movement provides training and resources for new young activists and organizers wanting to act around climate change. We also get perspective from Sarah Kaplan, an environmental reporter at the Washington Post who has covered the broader youth-led movement. And Xiao Mina, author of From Memes to Movements, discusses how social media activity can create real change.

Amid perils of climate change, there are reasons for hope

As National Geographic Explorer Victoria Herrmann observes, "We have the solutions. We have developed the technology, the knowledge, the science we need."

Our ABC Owned Television Stations meteorologists see not only our climate challenges, but also the solutions that can be deployed today to address the problem.

It's the possibility of a future powered by ingenuity, innovation and hope.