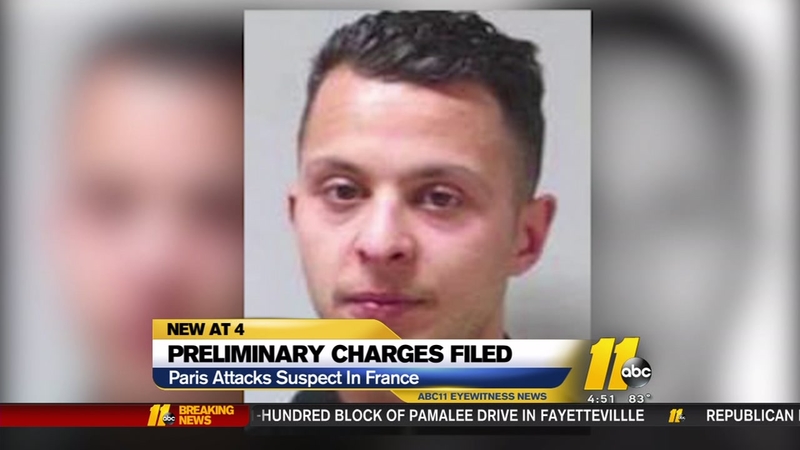 PARIS -- Paris attacks suspect Salah Abdeslam - Europe's most wanted fugitive until his capture in Belgium last month - has been returned to France and charged with a host of terror-related offenses, his lawyer said Wednesday.

The return of the last known survivor of those believed to have carried out the Nov. 13 attacks in Paris to the French capital may help investigators untangle some of the still-unresolved questions about the assault, which claimed 130 lives at restaurants, a noted music hall and a sports stadium outside the city. The Islamic State group claimed responsibility for the carnage.

Attorney Frank Berton told reporters that his client "volunteered that he would explain himself at some later date."

Abdeslam, a French citizen of Moroccan origin, spent four months on the run following the attacks and a month in Belgian custody after being tackled by heavily armed police outside his hideout in the Mollenbeek neighborhood of Brussels. Berton said the 26-year-old was being sent to Fleury-Merogis, a massive, high-security prison about 30 kilometers (19 miles) south of Paris, where he is due to be held in isolation in a special camera-equipped cell until his next hearing on May 20.

Abdeslam was extradited from Belgium to France earlier Wednesday in what Berton described as a "muscular operation" involving an early-morning transfer from his cell in Belgium and a cross-border helicopter ride. The express transfer surprised even Berton, who had to rush from Lille to join his client at Paris' Palace of Justice, arriving in the early afternoon.

The Paris attacks were carried out by three teams of assailants who blew themselves up or sprayed gunfire, and Abdeslam's testimony will likely prove significant to definitively linking the events that night - and in establishing how they fit in with the suicide bombings in Brussels that rocked the city on March 22. Abdeslam's brother Brahim was one of the Paris bombers.

Abdeslam faces preliminary charges of participating in a terrorist organization, terrorist murders and attempted murders, attempted terrorist murders of public officials, hostage-taking, and possessing weapons and explosives, French prosecutors said in a statement. French Justice Minister Jean-Jacques Urvoas had earlier said that Abdeslam would be placed in isolation, watched by guards specially trained to deal with "people reputed to be dangerous."

On the streets of Paris, there was a grim satisfaction at the return of the man whose team allegedly brought bloodshed to the streets of the French capital.

"If somebody killed one of my children, I'd want to see them brought to justice," said Therese Delafarge, a 71-year-old retired teacher. "It can be a consolation to the families to know that the criminal is punished."

Georges Salines, whose daughter Lola died at the Bataclan music hall, said Abdeslam's arrival in Paris had enormous significance for victims of the attacks.

"Up to this point, he is the key actor of the Nov. 13 attacks to be behind bars," he told BFM television. "I would like to look him in the eye. If I could even talk to him, it would be important to me."

Abdeslam's precise role in the attacks is unclear. He returned from France to Belgium afterward, calling cohorts in Brussels to fetch him. However, a suicide belt bearing his fingerprints was found south of Paris and a car he had been driving was found in a northern Paris district, prosecutors said. It had been widely suspected that Abdeslam pulled out of his own role as an attacker, something Paris prosecutor Francois Molins confirmed at a news conference, saying he had wanted to blow himself up at the sports stadium but backed down.

He was captured just four days before the March attacks on Brussels airport and a metro station that killed 32 people. IS also claimed responsibility for those attacks.

Brussels, and in particular the Molenbeek neighborhood, was home to many of the attackers who struck Paris. It was Abdeslam's childhood neighborhood and he was finally caught not far from the home where he grew up.

In a surprise assessment, the suspect's Belgian lawyer, Sven Mary, dismissed Abdeslam as a "little jerk among Molenbeek's little delinquents, more a follower than a leader."

"He has the intelligence of an empty ashtray," Mary was quoted as saying in a profile published Wednesday by the French daily Liberation that focused on the lawyer's career.

He "is someone who suddenly became the organizer ... He has neither the wherewithal nor the intelligence. That's what I wanted to say by empty ashtray," the Belgian lawyer said.

Abdeslam has already been charged with attempted murder over a March 15 shootout with police in Brussels. He was arrested three days later and police in Belgium have questioned him about any potential links to the suicide bombers in the Brussels attacks.

Geraldine Berger-Stenger, a lawyer for several of the French victims, warned against pinning too much hope on any revelations from Abdeslam.

"I expect he will cooperate but I am very cautious," she told French broadcaster BFM. Abdeslam is a key witness "but we are perhaps hoping for too much."