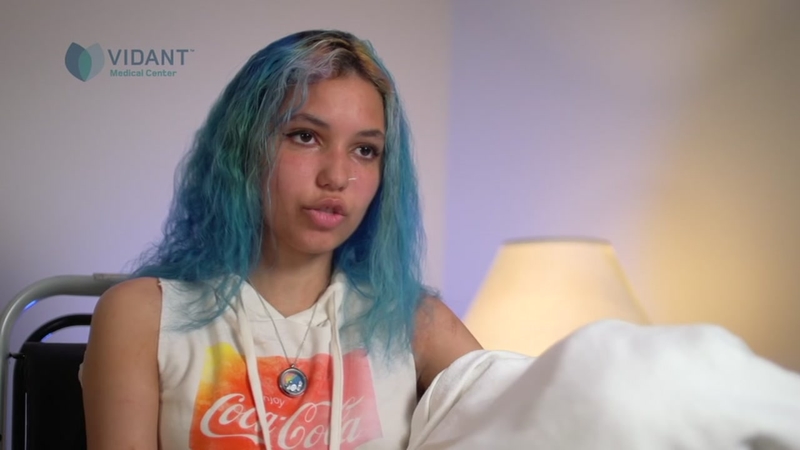 Paige Winter, 17, lost part of her left leg and had her hands damaged when a shark bit her at Atlantic Beach on June 2.

Her doctors and nurses had nothing but positive things to say about Winter's fighting spirit and outlook on life.

"She's smiling, she changes your mood automatically, she makes you laugh--she has the funniest jokes. She's also taught me a few dance moves," nurse Breanna Springer said. "I can honestly say that I'm so honored to be a part of her care."

In a message posted to Vidant Health's website, Paige reiterates that "sharks are still good people."

"I want people to see that I'm doing all right," Paige said. "I think I can transform this into something good for me, and good for sharks, and good for the environment too. That's just kind of what I really want; it's what I've wanted this whole time"

Toschlog went on to credit Paige's father for helping save his daughter's life.

"Without the action of her father, who was at Paige's side, who was able to beat the shark off of his daughter, and then carry her," Toschlog said.

Paige's father, Charlie Winter, spoke publicly Friday for the first time about what happened in the water.

"I turned to where Paige was and there was no Paige. Paige was underwater. There was pink on the water; I saw pink and it was moving," Charlie said. "It didn't take any seconds. It was just an immediate dad thing. I went straight to where the pink was and I dove under and I grabbed her. I grabbed her with my left arm and I pulled her up over the water. And when I pulled her up a shark came up with her, and it was a big shark. The head was--it was a big shark. I kind of thrashed it a little bit, and it had a big eye--just staring at you. I immediately just started to hit it. I read five times, it could've been 10 it could've been three, I don't know, I wasn't keeping track. I know I was hitting and I hit it with everything I could and it let go. I immediately grabbed her under my right arm...I turned and I started to run immediately back to shore."

Paige Winter's father talks about fighting the shark off his daughter

He said Paige was calm and all she was saying was "Dad." He said he told her that he had her.

"I grabbed her by her right hand, and I don't think I've ever told any of my children that I loved them so much so many times. I wanted her to know that I loved her."

Minutes after being attacked, her dad said Paige told her medics, "Don't be mad. Sharks are good people." Her focus was making sure nobody was going out to hunt a shark.

Charlie said Paige has a great spirit and will continue to her recovery, which her doctor said will likely take 6-12 months.