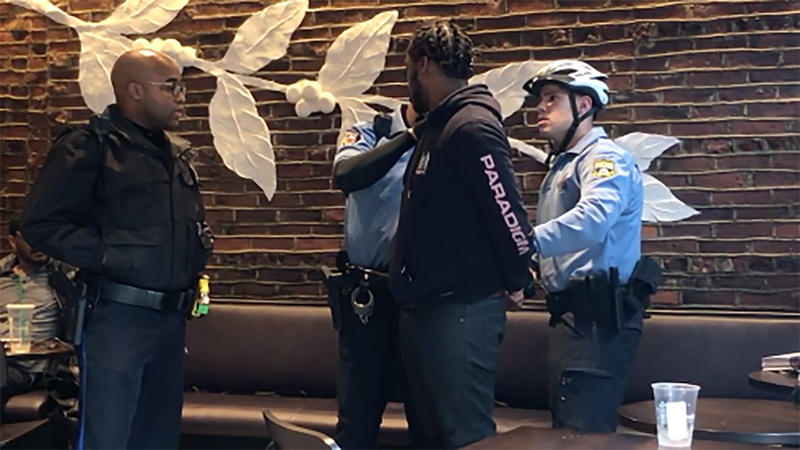 PHILADELPHIA -- Outrage is mounting after two men were arrested at a Philadelphia Starbucks, and an eyewitness said a manager escalated the situation by calling police instead of asking the men to buy something or leave.

Lauren, who asked that her last name not be used, shot video of the two men being arrested at the Starbucks just before 5 p.m. on April 12. She said the incident began after the men asked to use the bathroom and were told that it was only available for paying customers, which Philadelphia Police Commissioner Richard Ross later confirmed.

After the men had been "quietly hanging out, chatting and waiting for their friend," she said officers entered the restaurant and asked the two men to leave, saying that they would be trespassing if they did not leave.

"The two young men politely asked why they were being told to leave and were not given a reason other than the manager wanted them to leave," she told ABC in an email.

The men told the officer that they were waiting for a friend to arrive and offered to call that friend to prove that they had legitimate business at the restaurant, she said.

At that point, she said several officers began to move tables and chairs around the two men and take them into custody.

The friend for whom the men were waiting then arrived and attempted to intervene, but police told him the men "were not paying customers and thus were trespassing," Lauren recalled.

"The two men stayed calm and did not raise their voices once. Everyone else in the Starbucks, however, was appalled," she added.

Lauren said another woman had entered the Starbucks minutes before the men were arrested and was given the bathroom code without having to buy anything and that another person in the restaurant at the time of the incident "announced that she had been sitting at Starbucks for the past couple of hours without buying anything."

"These men were discriminated against and unjustly detained. Being a person of privilege, it's hard to believe things like this still happen in 2018," Lauren told ABC. "Sometimes you don't fully believe it until you see it with your own eyes."

The Philadelphia Police Department has launched an internal investigation into the incident, and Commissioner Richard Ross has said the officers had legal standing to arrest the men because Starbucks, the property owner, had asked to have them removed from their private property.

Watch Philadelphia Police Commissioner Richard Ross's full statement on the incident at a Philadelphia Starbucks, delivered via Facebook on April 14, 2018.

The men were eventually released from police custody, and the district attorney's office declined to press charges due to a "lack of evidence that a crime was committed."

Starbucks has since released a statement apologizing to the two men, adding that they are "disappointed this led to an arrest" and pledging to review their policies "to ensure these types of situations never happen in any of our stores."
Report a correction or typo
Related topics:
philadelphia newsarreststarbucksu.s. & worldphiladelphia police
Copyright © 2021 WTVD-TV. All Rights Reserved.
U.S. & WORLD

Our America: Paving our future by recognizing our past