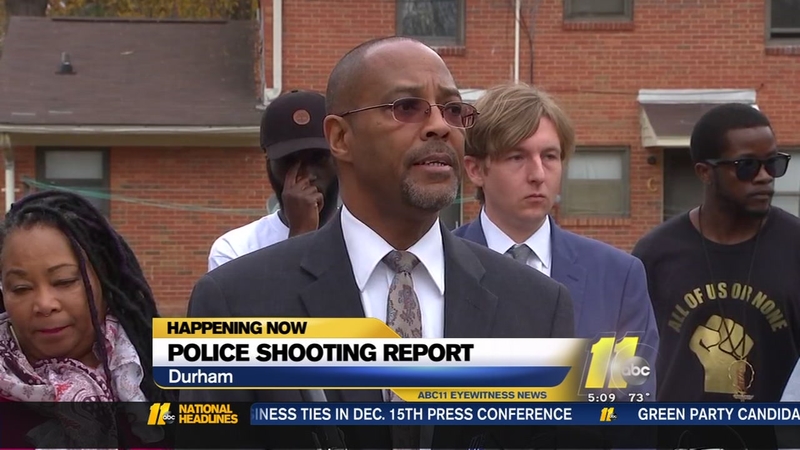 DURHAM (WTVD) -- A day after Durham Police released their five-day report on the shooting death of Frank Clark, his family said the report is inconsistent and spotty.

They accused the officers involved, officers C.Q. Goss, M.D. Southerland and C.S. Barkley for having a history of excessive force.

There's still some details unclear in the investigation, such as how many times Clark was shot, and where he was hit. But in the new report, Durham Police say Officer Barkley fired his weapon after hearing a gunshot during a struggle with Clark and the other officers.

The report also says the loaded 9mm handgun lying beside Clark's body after the shooting was reported stolen earlier this year. It is not clear whether the gun was fired.

The report also says that a white, rock-like substance in a plastic bag fell from Clark's pants.

SBI is now reviewing the evidence along with the handguns involved.

Durham Police say the three officers involved were patrolling McDougald Terrace on November 22 because of an increase in violent crime. When they approached Clark, Durham police say the 34-year-old made a movement toward the waistband of his pants.

The family told reporters shortly after the shooting that Clark was unarmed. During the press conference Wednesday, ABC11 asked their attorney, David Hall, about the claim.

"There were a lot of speculation stories I don't think that we can actually know what happened that day," Hall said. "We are hoping the SBI can shed some light.

"As far as moving forward, we would like gunshot residue tests from the deceased, his clothing, his officers, and touch DNA on the gun found next to the deceased," he added. "And an inquiry into past excessive force by these three officers."

All three officers have been with DPD for more than a decade.

Barkley, Goss and Southerland are on paid administrative leave pending the outcome of the SBI investigation.