McCrory and Cooper spar over HB2 at debate 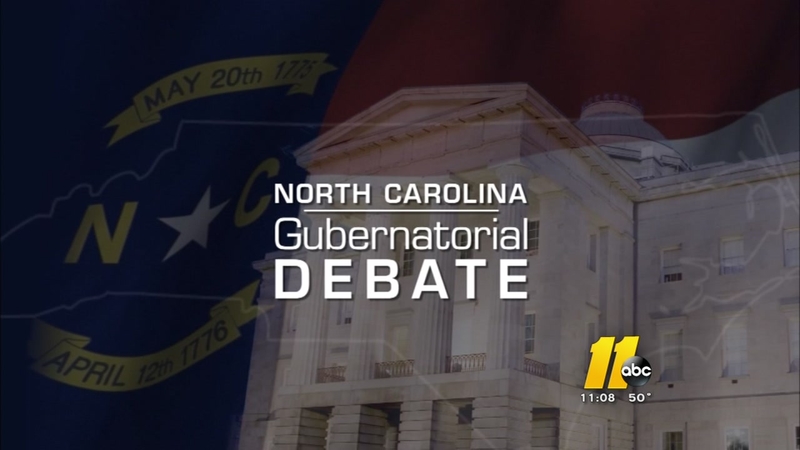 Cooper went on the attack early, saying McCrory has taken the state backwards.

"We need a good jobs governor, not an HB2 governor," charged Cooper.

On question of canceling #debate due to the flooding disaster, Roy Cooper says, "the people deserve to hear from the candidates". pic.twitter.com/TVzN4YE8p2

After the #debate, Gov. McCrory tells reporters he considered canceling in light of the flooding emergency. "Democracy must go on." pic.twitter.com/hu9dMUbXsp

Since the state law was passed, multiple corporations have cancelled plans to bring jobs to the state and the NBA has pulled a championship game from Charlotte. Cooper charged the issue has cost the state millions of dollars.

Responding to Cooper, Governor McCrory blamed Charlotte leaders for creating the problem in the first place.

"It wasn't needed. It wasn't called for. It was the liberals who brought this up," said McCrory.

Arguing over teacher pay, Governor McCrory compared Cooper to another North Carolina politician who started as a lawyer - John Edwards - when he said McCrory isn't being honest about how much he's done to increase teacher salaries.

"The governor has had four years and we are now 41st in the nation," said Cooper.

McCrory responded that he has improved the situation from where the state was 48th when he took office and he didn't want to break the budget by increasing it further.

Later, the discussion turned to Donald Trump and the now notorious video of him making comments about women.

McCrory has condemned the comments.

"He needs to have his mouth washed out with soap and so does Mrs. Clinton because she lies," said McCrory.

The governor said he continues to support Trump because he agrees with him on immigration and Obamacare.

"It's hard to believe that our governor supports a candidate that condones sexual assault," said Cooper.

Asked about North Carolina's voter ID law which a court has said targeted African Americans in an attempt to discourage them from voting, Cooper said Governor McCrory should stop using taxpayer money to defend it.

"It's shameful for the Governor to keep pushing this legislation that is wrong for our state," said Cooper.

But McCrory said the law was intended to block voter fraud.