In a near-unanimous vote, the Senate Committee on Redistricting and Elections approved the new maps which divide communities into representative voting blocs. The committee also opened the maps up for public comment until noon Monday which will be followed by a public hearing at the General Assembly.

BEFORE: Map of current districts as of 2018

In a joint statement, Senate Democratic Leader Dan Blue and Republican Committee Chairs Paul Newton, Warren Daniel, and Ralph Hise said, "This is the most transparent redistricting process in history. The maps produced in this room in the last several days are fair and nonpartisan. We approve of them and urge the full Senate to do the same."

The Senate plans to vote on the new map Monday night.

The current maps, drawn and approved by the Republican-led General Assembly, were thrown out earlier this month by a panel of judges for being drawn to favor the political interests of one party over another, a practice known as gerrymandering in the political arena.

AFTER: Map proposal for 2019, Senate committee is asking for public comment

The order from Wake County Superior Court mandated both the House and Senate to redraw the maps in a complete transparent within two weeks; the court approved a one-week extension after Hurricane Dorian. 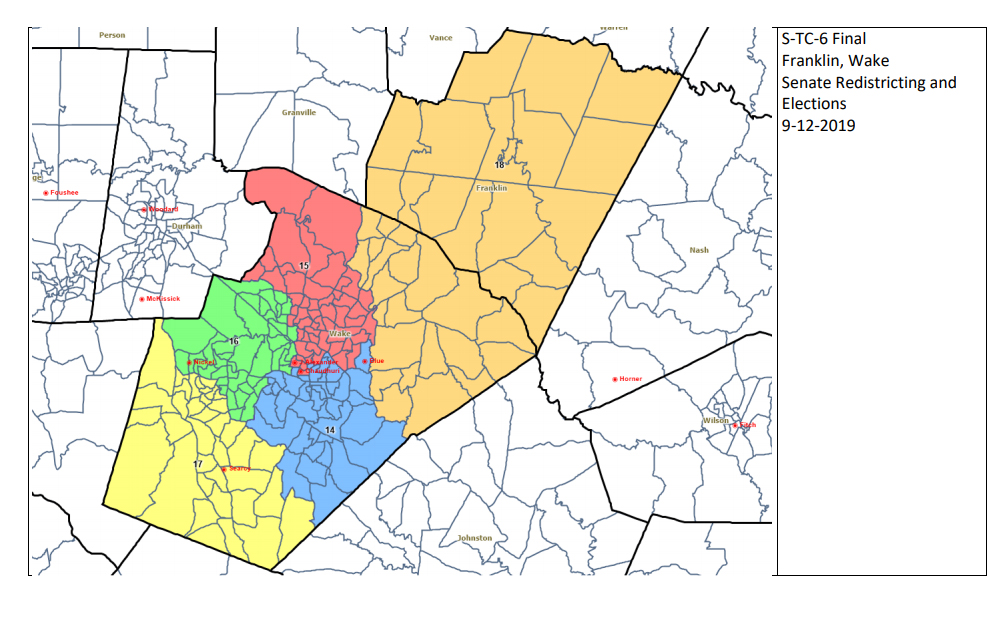 North Carolina judges who ruled the state's legislative district maps were drawn to unconstitutionally favor Republicans are hiring a familiar expert to review how state lawmakers fix the problem.

Persily served as a special master to a federal court panel that ruled in 2016 that more than two dozen of North Carolina's 170 legislative districts approved in 2011 were illegal racial gerrymanders. The maps were revised by legislators in 2017, but the state judges ruled those districts were also political gerrymanders.

This latest ruling is strictly related to the North Carolina Constitution and state laws.

Typically, redistricting occurs once every 10 years, after the decennial census. As Republicans gained strong majorities in 2010, they redrew both state and congressional maps and if not for court order those would still apply.

Whichever party gains the majority in the 2020 election will lead the legislature in time for the 2020 Census, and that could reshape the political landscape in North Carolina for the next decade.

To comment on the 2019 NC Senate Redistricting maps check here.

Plaintiffs in a successful North Carolina redistricting lawsuit say state judges should allow the public release of a trove of documents culled from a late Republican mapmaker's files.

Common Cause and North Carolina Democrats were permitted to use a small number of files they subpoenaed from the daughter of Thomas Hofeller in a partisan gerrymandering trial in July.

The judges ordered the rest remain confidential while Hofeller's old firm designated documents they wanted to remain private. That confidentiality order - issued before some documents also were used in litigation over a U.S. census citizenship question - expires next week.

Democratic U.S. senators and media outlets such as The Associated Press and The New York Times filed briefs on Friday - as did the plaintiffs - asking more documents be released.
Report a correction or typo
Related topics:
politicsraleighpolitics
Copyright © 2020 ABC11-WTVD-TV/DT. All Rights Reserved - The Associated Press contributed to this report.
More Videos
From CNN Newsource affiliates
TOP STORIES