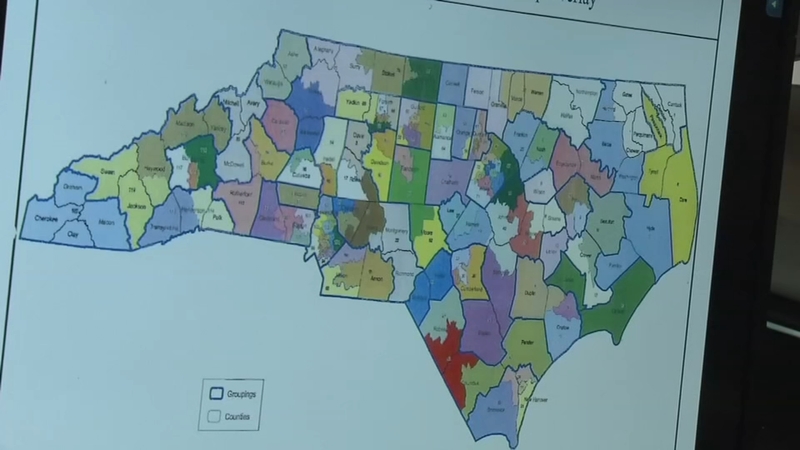 RALEIGH (WTVD) -- A three-judge panel on Tuesday ruled that the current voting districts for North Carolina's General Assembly are unconstitutionally too-partisan, and the Republican-led legislature must redraw the maps within two weeks.

The unanimous vote in Wake County Superior Court is the latest chapter in a long saga surrounding the drawing of maps which critics have charged are drawn to favor the political interests of one party over another, a practice known as gerrymandering in the political arena.

"This is a historic victory for the people of North Carolina," Bob Phillips, Executive Director of Common Cause, said in a statement. "The court has made clear that partisan gerrymandering violates our state's constitution and is unacceptable. Thanks to the court's landmark decision, politicians in Raleigh will no longer be able to rig our elections through partisan gerrymandering."

In surprising statement, Senate President Phil Berger (R-Rockingham) blasted the ruling, but signaled GOP majorities will not appeal the decision to the NC Supreme Court.

Instead, Berger said Republicans will follow court orders to redraw maps within two weeks and follow all the protocols as laid out by the court "to end this matter once and for all."

The U.S. Supreme Court earlier this summer issued its own landmark decision on partisan redistricting, but that ruling pertained only to federal courts.

"What the appellees and dissent seek is an unprecedented expansion of judicial power," wrote Chief Justice John Roberts for the 5-4 majority.

This latest lawsuit, however, is strictly related to the North Carolina Constitution and state laws, which means the SCOTUS decision need not apply.

Some lawmakers, increasingly wary of court decisions, have filed bills in the General Assembly proposing new checks and balances on redistricting, but those have not moved out of committee.