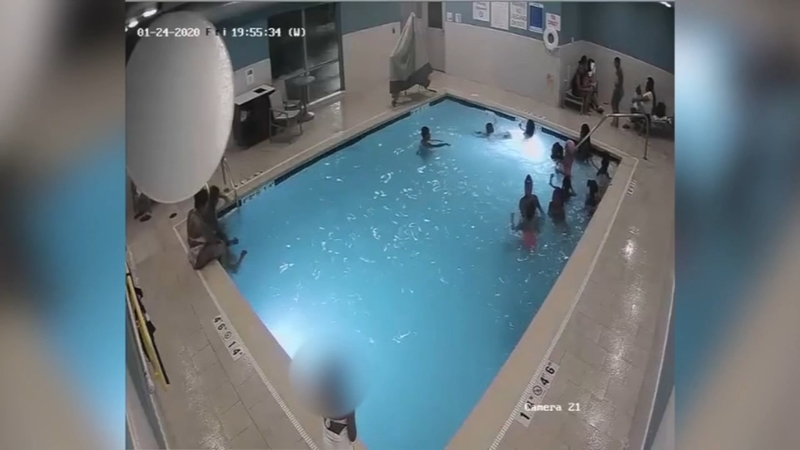 LIVONIA, Mich. -- A quick-thinking 9-year-old is being called a hero for alerting adults to a deadly danger at a Holiday Inn Express Pool.

Dozens of people were enjoying the hotel pool on Jan. 24 in Livonia, Michigan.

Surveillance video shows a toddler sink to the bottom of the pool.

"He's trying to swim. He's trying to get in a position to get upright. There's a lot of people playing. I think he gets lost in the confusion," Capt. Ron Taig said to WXYZ.

About four minutes later, a young girl notices him. She immediately alerts her godmother, who jumps in the pool and pulls the toddler to safety.

Coincidentally, there was a nurses convention happening at the hotel. Two nearby nurses, jumped into action, performing CPR and helping save the toddler's life.

"It gives you goosebumps see these nurses working on this child. They did multiple rounds of CPR to bring him back," Taig said.

Police said the toddler's mother was at the pool with him. It's unclear if she will face any criminal charges in the case.

Investigators said they released the surveillance video to remind everyone how quickly a fun afternoon can turn tragic.

"Be aware. Watch people. Watch your children," Taig warns. "Because of the confusion and chaos, the child gets too far away. You gotta keep people close."

In addition, the police department nominated the 9-year-old girl, her godmother and the two nurses for the city's highest civilian award.

"From the child that identifies that there's a child at the bottom of the pool, the godmother that jumped in, the nurses that go into action and do what they're trained to do. They're truly the heroes," Taig said.
Report a correction or typo
Related topics:
michigandrowningswimmingcaught on videosurveillancecaught on camerasurveillance video
Copyright © 2022 WTVD-TV. All Rights Reserved.
TOP STORIES
Snow likely to stick around due to cold temperatures
Aerial views of Triangle area covered in snow
Slick roads found across central NC
Delta flight slides off taxiway after landing at RDU
Arnold Schwarzenegger involved in multi-vehicle crash
Booster shots needed against omicron, CDC studies show
Regina King's son, musician Ian Alexander Jr., dead at 26
Show More
Truck with 100 monkeys crashes, 1 still on the loose, police say
How to make snow cream
Anti-mask parent threatens to bring guns to school: 'Loaded and ready'
Laundrie claimed responsibility for Petito's death in notebook: FBI
2 NYPD officers shot, 1 fatally, responding to domestic violence call
More TOP STORIES News