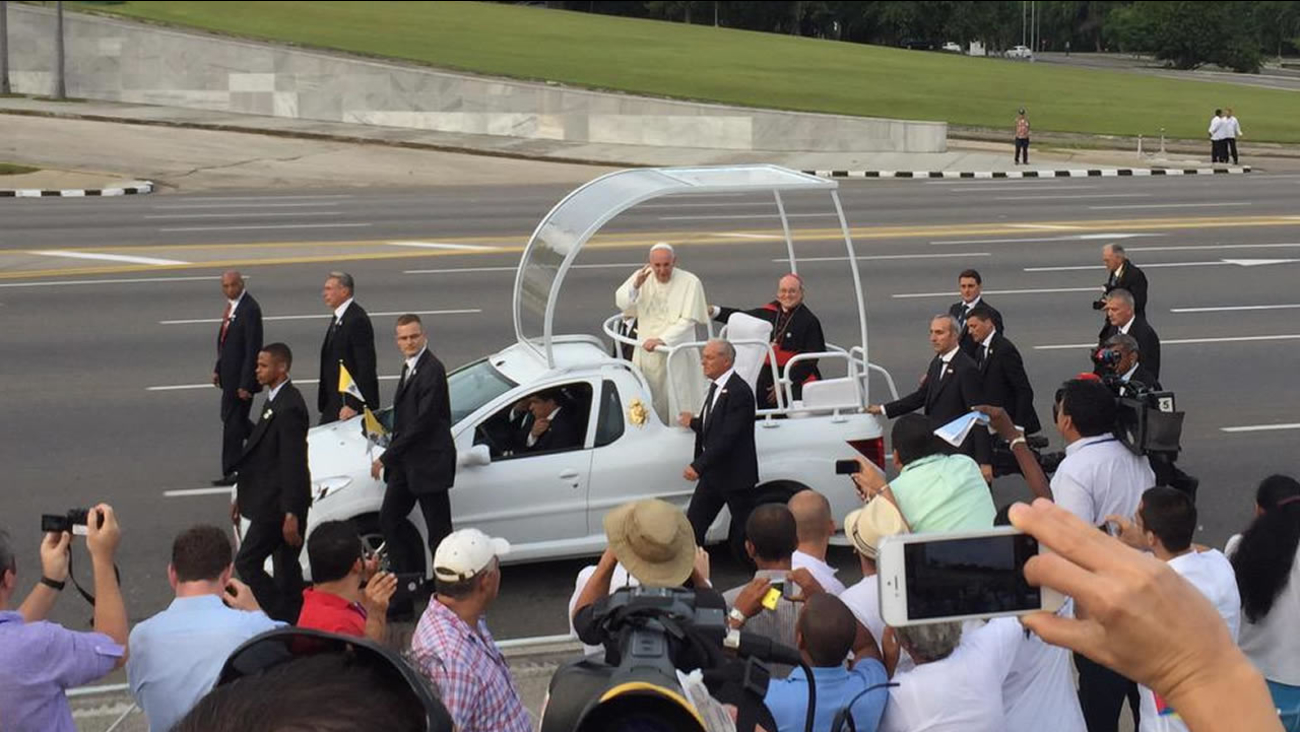 HAVANA -- Pope Francis met with Fidel Castro on Sunday after urging thousands of Cubans to serve one another and not an ideology, a subtle jab at the communist system delivered during a Mass under the gaze of an image of Che Guevara in Havana's iconic Revolution Plaza.

The Vatican described the 40-minute meeting at Castro's residence as informal and familial, with an exchange of books and discussion about big issues facing humanity, including Francis' recent encyclical on the environment and the global economic system.

Unlike the 2012 visit of Benedict XVI, when Castro peppered the German theologian with questions, the meeting with Francis was more of a conversation, papal spokesman the Rev. Frederico Lombardi said.

Francis called on Castro after celebrating Mass in Havana's main plaza on his first full day in Cuba. Believers and non-believers alike streamed into the square before dawn, and they erupted in cheers when history's first Latin American pope spun through the crowd in his open-sided popemobile. Francis didn't disappoint, winding his way slowly through the masses and stopping to kiss children held up to him.

While most Cubans are nominally Catholic, fewer than 10 percent practice their faith and Cuba is the least Catholic country in Latin America. The crowd was not as big as when St. John Paul II became the first pope to visit the island in 1998, but it drew people who seemed to genuinely want to be there and listen to Francis' message.

"This is very important for us," said Mauren Gomez, 40, who traveled some 250 kilometers (155 miles) from Villa Clara to Havana by bus, spending her time reciting the Rosary.

In his homily delivered under the gaze of a metal portrait of revolutionary fighter Che Guevara, Francis urged Cubans to care for one another out of a sense of service, not ideology. He encouraged them to refrain from judging each other by "looking to one side or the other to see what our neighbor is doing or not doing."

"Whoever wishes to be great must serve others, not be served by others," he said. "Service is never ideological, for we do not serve ideas, we serve people."

Many Cubans complain about the rigidity of Cuba's system in which nearly every aspect of life is controlled by the government, from cultural institutions to block-level neighborhood watch committees. Cubans can be excluded or lose benefits if they are perceived as being disloyal or unfaithful to the principles of the revolution.

Cubans are also increasingly concerned about growing inequality on the communist island, in which those with access to foreign capital live lives of relative luxury while others can barely feed themselves, generating jealousy and division within families and society at large.

"Being a Christian entails promoting the dignity of our brothers and sisters, fighting for it, living for it," Francis told the crowd. "That is why Christians are constantly called to set aside their own wishes and desires, their pursuit of power, and to look instead to those who are most vulnerable."

Maria Regla Gonzlez, a 57-year-old teacher, said she appreciated Francis' message of reconciliation and unity for all Cubans, and said Francis was particularly able to convey it given he is Latin American and speaks their language.

"This is a crucial moment, and the pope's support for us is very important," she said. "He made a call for unity, and that's what we want."

Lombardi, the Vatican spokesman, said Francis' meeting with Castro was low-key and involved an exchange of views about big issues facing the world. He said that out of respect for Castro's family, no photographs would be released.

Francis brought Fidel three books: Two by an Italian priest, Alessandro Pronzato, and one by Fidel's former Jesuit teacher, the Rev. Amando Llorente. Llorente taught at Colegio de Belen, where Fidel was a student, and the book was a collection of his preachings. Llorente was forced into exile after Castro's revolution and died in Miami in 2010.

Francis also brought two compact discs with Llorente's voice, as well as copies of his papal encyclical "Praise Be" and previous document, "The Joy of the Gospel."

Castro gave the pope a book of his musings on religion, written with the Brazilian cleric Frei Betto.

Francis was finishing the day with a meeting with Fidel's brother Raul, an evening vespers service in the San Cristobal Cathedral and a meeting with Cuban young people.

In an important aside, Francis ended Sunday's Mass with an appeal for Colombia's government and rebels, who have been holding peace talks in Havana for over two years, to put an end to South America's longest-running armed conflict.

"Please, we do not have the right to allow ourselves yet another failure on this path of peace and reconciliation," he said.

The appeal followed the historic call he issued to President Barack Obama and Cuban President Raul Castro to end their half-century of estrangement that resulted in the restoration of diplomatic relations this summer. Since then, the two leaders have reopened embassies in each other's countries, held a personal meeting, had at least two phone calls and launched a process aimed at normalizing ties in fields ranging from trade to tourism to telecommunications.

Jose Rafael Velazquez, a 54-year-old worker, arrived with his wife at the plaza three hours before Mass began. He said he wasn't religious, but came more out of curiosity to witness a historic event.

"We also are very hopeful for this visit, because the pope was key in the deal with the United States," he said. "Ever since the announcement, there have been changes and this visit gives me more hope that it'll get better."

The Vatican has long opposed the U.S. trade embargo on the grounds that it hurts ordinary Cubans most, and is clearly hopeful that detente will eventually lead to a lifting of sanctions.

But only the U.S. Congress can remove the embargo. Francis will visit Congress next week at the start of the U.S. leg of his trip, but it's not known if he will raise the issue there.

Cecilia Villalejo, a 69-year-old retiree, was nearly brought to tears with the final hymn of the Mass, saying the Cuban people desperately need a message of hope to have the strength to carry on.

"I feel very sad. I've got all my family in the United States, especially my son whom I haven't seen for 15 years," she said. "And I'm sad because in reality, I don't think much will come of all this."