If you file a claim for pothole damage, you probably won't get paid. Here's why you should do it anyway 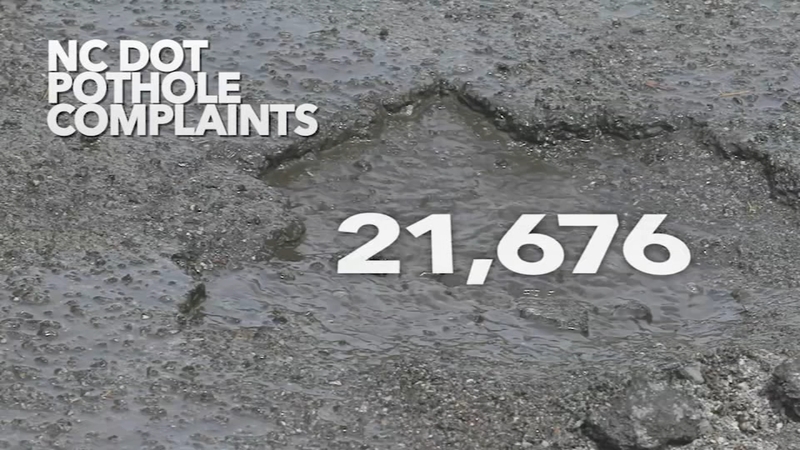 If you file a claim for pothole damage, you probably won't get paid

RALEIGH, N.C. (WTVD) -- You pay taxes for the roads to be maintained, so if a pothole causes damage to your vehicle who pays up? We crunched the numbers, and in most cases, you'll likely be stuck with the bill.

Olivia Mantel learned that the hard way after hitting a pothole driving along Highway 55 in Cary near the intersection of High House Road.

"The pothole was super deep," she said. "I was not going fast but there was a car in front of me and there was no way I could have seen, plus it was raining really bad that day so the pothole was filled with water."

As soon as she hit it, she pulled over as both of her tires on one side were completely flat.

"I knew there was damage because I felt the huge impact," Mantel said. She says shortly after she hit the pothole, there were orange construction cones places near it.

After getting two new tires she reported the pothole and filed a claim with the North Carolina DOT to see if it would cover the damage since the state is in charge of maintaining the road. While the pothole was repaired, her claim for payment was denied.

When it comes to claims filed with the NCDOT drivers reported more than 21,676 potholes from September of 2018 through October of 2019. The state can't tell me how many damage claims for compensation were filed but did say they only took responsibility for 17 pothole damage claims and paid out $13,068. In those 17 cases, the state admitting they knew about those potholes but didn't fix them in a timely fashion.

If a vehicle was damaged because of a pothole, according to the NCDOT, it generally submits the driver's claim, as well as its own report, to the N.C. State Attorney General's Office, which will determine whether NCDOT knew about the pothole and made an effort to repair it within a reasonable length of time. If the Attorney General's Office denies the claim, drivers can appeal to the N.C. Industrial Commission.

When it comes to how long the NCDOT has to fix a pothole once it's reported, a representative said the goal is to repair a pothole within two business days of it being reported to the office that will do the repairs. However, the representative added that there are circumstances that would extend the time taken to fix a pothole, primarily with weather. He said they don't fix potholes in rain or snow or when the temperature is so low that asphalt doesn't cure and stick. In some spots the crews may do what is known as cold patching as a temporary fix, but when weather cooperates they have to go back for a more permanent solution.

When it comes to pothole damage complaints with the cities and towns in the Triangle, Durham paid the most in pothole claims, accepting responsibility for 52 of the 111 damage claims filed which meant paying out $30,634 to those drivers.