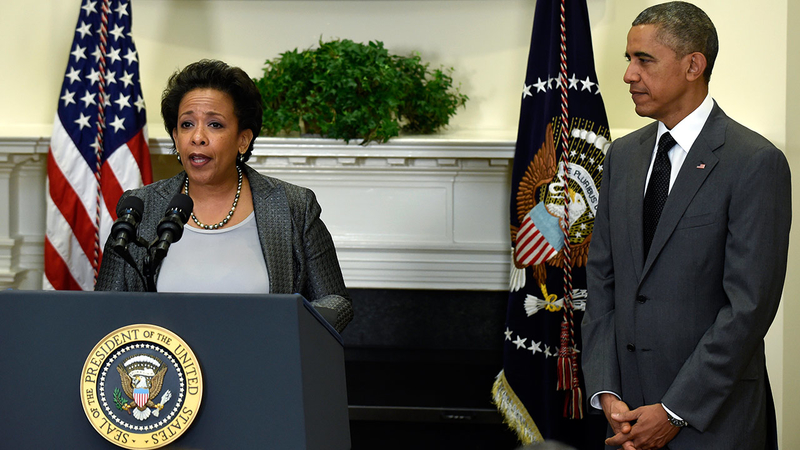 DURHAM (WTVD) -- Loretta Lynch has been nominated as the new attorney general, and if confirmed by the Senate, the Durham native would be the first black woman in the job.

"Thank you for your faith in me and asking me to succeed an attorney general whom I admire and to lead the department that I love," said nominee Loretta Lynch.

"She has spent years in the trenches as a prosecutor aggressively fighting terrorism, financial fraud, cyber-crime, all while vigorously defending civil rights," said Obama. "In a country that is built on the rule of law, there are few offices more important than that of Attorney General."

Lynch's 82-year-old father Lorenzo sat down with ABC11 to speak about the nomination. He says she can handle the weight of this job.

"He [Obama] said she works to make a difference and not to make a name, and that's a pretty good description of her," he explained.

Lynch's father watched the announcement back in Durham with pride. He showed ABC11 where photos of his 55-year-old daughter are prominently displayed. Among them, a wedding portrait and a picture with outgoing Attorney General Eric Holder.

Lynch is currently in her second stint as U.S. Attorney General for the Eastern District of New York. She's overseen bank fraud and other public corruption cases. She also tried a reputed mobster and his associates in a multi-million dollar cash and jewelry heist at Kennedy Airport.

The White House said Obama is leaving it up to Senate leadership to determine whether she should be confirmed this year while Democrats are in control, or next year, when Republicans take over.

Lynch's father is proud how far his daughter come, but he knows the road ahead won't be easy.

"She's a black woman. She's a Democrat. She's been confirmed by the Judiciary Committee of the Senate twice - once under President Clinton and once under President Obama. But the political climate is getting sour," said Lorenzo Lynch. "It's a terrible fight ahead in the Senate Judiciary Committee and were not underestimating that fact ahead of the fight."

Lynch's father says she graduated from Durham High School with honors in 1977. She received undergraduate and law degrees from Harvard, where Obama graduated from law school seven years after her. Personally, she goes by Loretta Lynch Hargrove, having married Stephen Hargrove in 2007.

Holder announced his resignation in September after serving as the nation's first black attorney general.

Obama had planned to wait until after a trip to Asia next week to announce the choice but then moved up the decision after news organizations began reporting that Lynch was his choice.

Senate Republican leader Mitch McConnell has taken the stance that her nomination should be taken up in the new year. Democrats on Capitol Hill have told the White House it would be difficult to win confirmation for a new attorney general during the lame-duck session of Congress beginning next week, especially considering all the other competing priorities they face before relinquishing power to Republicans. Pushing through a nominee also quickly could taint the new attorney general's start in the office, some Democrats have argued.

It's unusual for Obama to pick someone he doesn't know well for such a sensitive administration post. But at a time when Obama is under political fire, Lynch's distance from the president could be an asset in the confirmation process. Another candidate Obama asked to consider the job, former White House counsel Kathy Ruemmler, asked not to be nominated out of concern her close relationship to Obama could lead to a difficult confirmation effort.

Republicans are promising tough scrutiny after years of battles with Holder. He is close to Lynch and appointed her as chair of a committee that advises him on policy. Since Lynch is unfamiliar to many on Capitol Hill, senators will have to get up to speed on her record quickly.

"U.S. attorneys are rarely elevated directly to this position, so I look forward to learning more about her, how she will interact with Congress, and how she proposes to lead the department," Grassley said. "I'm hopeful that her tenure, if confirmed, will restore confidence in the attorney general as a politically independent voice for the American people."

One lawmaker in particular - in the House - is quite familiar with her work. Lynch filed tax evasion charges against Rep. Michael Grimm, a Republican accused of hiding more than $1 million in sales and wages while running a restaurant. Grimm, who won re-election Tuesday, has pleaded not guilty and is to go to trial in February.

Lynch has overseen bank fraud and other public corruption cases, including the March conviction of New York state Assemblyman William Boyland Jr. after he was caught accepting bribes in a sting operation and the 2013 conviction of former state Sen. Pedro Espada Jr. for looting taxpayer-subsidized health care clinics he ran.

She also charged reputed mobster Vincent Asaro and his associates for the 36-year-old heist of $6 million in cash and jewelry from a Lufthansa Airlines vault at Kennedy Airport, dramatized in the movie "Goodfellas."

Holder was an unflinching champion of civil rights in enforcing the nation's laws and is leaving as the department grapples with several prominent civil rights issues. They include possible federal charges in the deaths of Michael Brown in Ferguson, Missouri, and Trayvon Martin in Sanford, Florida; enforcement of the Voting Rights Act after the Supreme Court threw out a major protection; reduction of racial profiling in federal investigations; changes in how federal prosecutors negotiate sentencing; changes in the death penalty system; and efforts to reduce tensions between local police departments and minority communities.