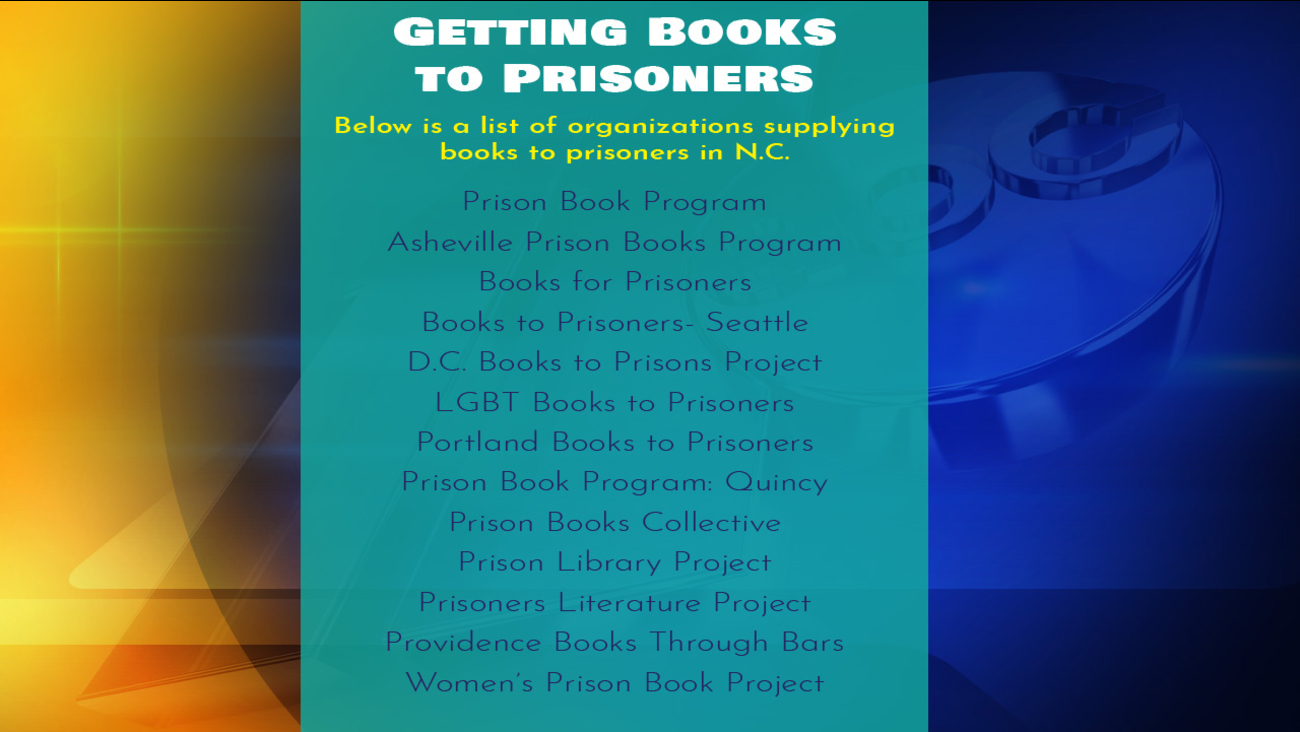 DURHAM, NC -- Katya Roytburd was first inspired to work with prisoners when she was in high school in the 1990s.

She was a ski instructor in Maine, and one of her supervisors was a petite woman named Joy, who taught a class for prisoners to help them get their GEDs. Roytburd said the woman's fearlessness and compassion compelled her to help prisoners.

Related article:Banned books and a lack of librarians: reading in North Carolina prisons

Fast forward a decade - Roytburd received her bachelor's degree in biology at Rensselaer Polytechnic Institute in 1999, and her master's in public health at the University of North Carolina at Chapel Hill in 2007. She's worked in public health in the Triangle ever since, and while she may not be helping inmates get their GED, she has found other ways to contribute to prisoner rehabilitation.

In 2010, Roytburd started volunteering at the Prison Books Collective - an all-volunteer, non-profit organization located in Durham, North Carolina, that provides prisoners in North Carolina and Alabama with free books, as well as 'zines, or small self-help pamphlets, which it sends to every state.

"Through our connection to people in prison through bringing them books, we make sure they are not forgotten," Roytburd said. "They know that somebody on the outside cares, and hears them, and acknowledges their humanity."

The collective's selection of donated books spans more than half a dozen six-foot shelves and several boxes. All genres are represented, including science-fiction, mystery, health, LGBT and women's studies. The 'zines catalog includes different categories, including anarchism and radical politics; earth and animal liberation; gender, feminism and sexuality; and prisons and political prisoners.

The collective also sends prisoners a resource guide that provides contacts to other books and magazines, as well as an extensive list of support groups, legal resources and parenting and family services.

To send material into prisons, the packaging process must be precise or some prisons won't accept the books. Some states don't allow the envelopes to have metal clasps. And some prisons have their own additional rules. For instance, some require approval for the books to be sent.

"A lot of the restrictions seem idiosyncratic," Liz Schlemmer, a volunteer at the collective, said. "Honestly, it feels like some restrictions are punitive and are just meant to make it as difficult as possible on us."

One challenge is that volunteers don't have access to an official list of the North Carolina Department of Public Safety's Disapproved Publications Report, so they can't be sure whether certain publications will be accepted into the prison.

Sometimes these bans are based on content, such as nudity or passages that could incite violence. Sometimes hardback books aren't permitted if they're heavy enough to be used as a weapon.
But some bans are more peculiar, like Maya Angelou's autobiography, "I Know Why the Caged Bird Sings," or Peter David's "Marvel: The Avengers Vault," a superhero comic book.

There were 480 banned publications on the report as of Jan. 23. But the list is constantly changing. Books are put on the list for one year and then removed until a prison moves to have it banned again. This creates a revolving door of books moving on and off the list, and it's difficult for organizations to keep up.

Another challenge the collective has faced is that in order for prisoners to receive books, they must be sent by either a publisher or a distributor. Prisons have challenged the collective's credential to send books on a couple of occasions, but it maintained its status after an independent review by the state.

The collective's workspace is located in a building that was donated to the nonprofit, so it's rent-free. The main financial burden is the cost of mailing books and printing 'zines, which runs roughly $500 per month.

One of the ways the collective generates funding is through its annual book sale at UNC-Chapel Hill. The collective donates books to the Student Chapter of the American Library Association and receives a cut of the profits.

The book sale will take place from Tuesday, April 3, to Thursday, April 5, outside of Davis Library's main entrance from 9 a.m. to 5 p.m. Most hardbacks will be $2 and paperbacks $1, while other media and arts books will be $5 or less. chapter President Amelia Midgett-Nicholson said the goal is to sell 1,000 books.

"I absolutely see similarities between the mission of the Prison Books Collective and the mission of SCALA at UNC," Midgett-Nicholson said. "Ensuring equal access to information is a core tenet of our field, and SCALA strives to work with organizations that fight for the right of all people to exercise their first amendment right to intellectual freedom."

Inside the workspace of the collective, there are two cork boards covered in letters from prisoners. Some are original literary works inspired by books and 'zines sent by the collective, but most are letters expressing gratitude to the volunteers. Roytburd said she wishes some of the letters could be published.

"You gain a lot of compassion if you read enough stories," Roytburd said.

"Thank you for the books you sent me in December. I really enjoyed them. I am grateful for the many volunteers that take the time to read our letters and choose books for us at no cost to us. It is hard to find not only dedication to a cause in this day time, but true compassion for others, for no reason but to bring joy, a smile and a chance to travel somewhere else for a while in a book. I can never say thank you enough."
Report a correction or typo
Related topics:
durhambooksprison
TOP STORIES
LIVE: Update after 19 kids, 2 teachers killed in TX school shooting
Severe storms possible Friday, nice weekend ahead
Officials: Buffalo, Uvalde shooters allegedly abused animals
'Goodfellas' and 'Field of Dreams' actor Ray Liotta dies at 67
OBX beach goers urged to wear shoes on beach
Canes seek series lead against Rangers in game 5
Onlookers urged police to charge into TX school: 'Go in there!'
Show More
UNC softball player to coach in summer baseball league
Columbine survivor reacts to Texas elementary school shooting.
Kevin Spacey charged in UK with 4 counts of sexual assault
RDU adds new airline, another adding several new routes
Should you talk to young kids about mass shootings? And how?
More TOP STORIES News