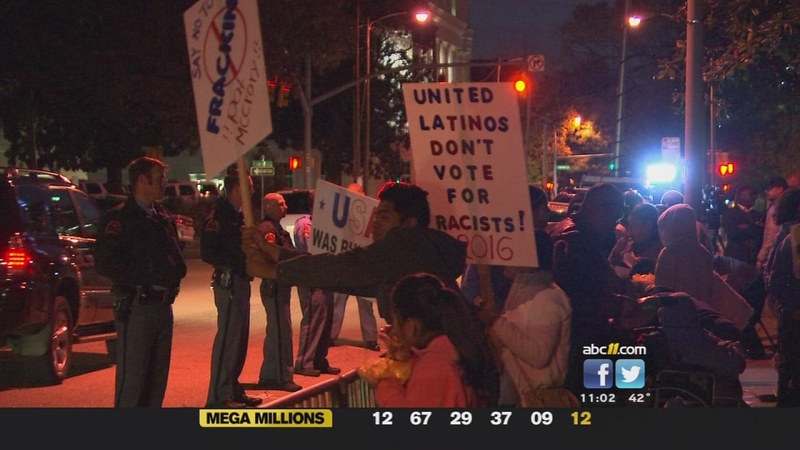 RALEIGH (WTVD) -- Dozens of immigrant families banged on pots and pans as they marched through the streets of downtown Raleigh Friday afternoon, hoping to change Gov. Pat McCrory's mind about immigration reform.

Some members of the group traveled from Charlotte as part of the 'We Make America Great" walk and bike ride.

Protestors marched from Moore Square to the Governor's Mansion, waving signs and demanding McCrory pull out of a 26-state lawsuit challenging President Obama's executive action on immigration. It would allow 5 million undocumented immigrants to stay in the U.S.

"If he doesn't change his mind, it will deprive me from my opportunities. Colleges won't accept me for not being a U.S. citizen," said 15-year-old Mitzy Hernandez Figueroa.

Figueroa grew up in Raleigh but said she has to work twice as hard to prove she belongs here. She is currently taking college course through her high school in hopes of one day becoming a surgeon.

"The future of North Carolina is with these kids," said activist, Sheila Arias. "At the end of the day, they get a better job. It's just going to benefit the North Carolina economy."

Protestors said the president's executive action would allow them to work and pay taxes which could amount to millions in economic benefits for the state.

"We are people who create jobs, who came here to work to get a better life," said Maura Trejo who opened a local pizzeria three years ago.

Raleigh police set up barricades along Blount St. to keep protestors out of the streets. The rally remained peaceful without any arrests.

"The president bypassed Congress and legalized the presence of approximately five million immigrants who entered the U.S. illegally. This lawsuit is about upholding the U.S. constitution and the rule of law which is why North Carolina joined its fellow states to stop this expansion of presidential power," said McCrory in a statement to ABC11.

The state's injunction has been upheld by the 5th Circuit Court of Appeals.