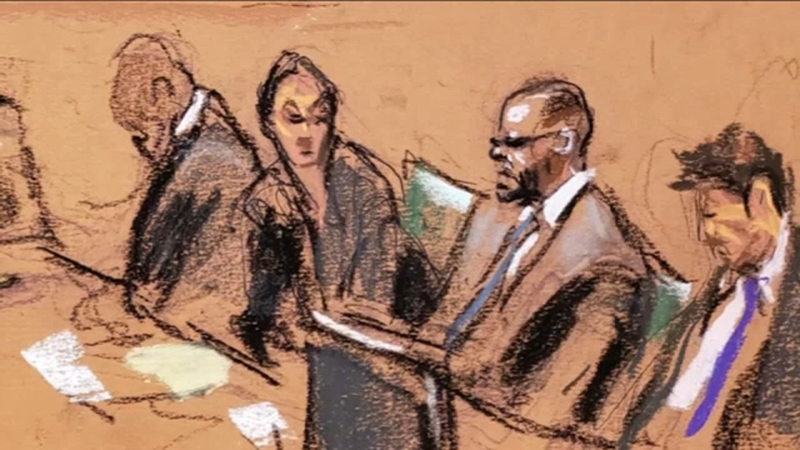 About 25 miles outside of Chicago in the village of Olympia Fields sits a mansion that R. Kelly once lived and worked in.

The home was also the site of his studio called the "Chocolate Factory," which operated from about 2004 to 2010, according to testimony during Kelly's federal trial in Brooklyn for racketeering and sex trafficking charges.

Prosecutors say Kelly was the leader of a criminal "enterprise" made up of some of the people who served as the singer's managers, bodyguards, drivers, personal assistants, runners and members of his entourage, CNN reported.

Separately from this case, Kelly faces federal child pornography and obstruction charges in the Northern District of Illinois, and faces state charges there for multiple counts of aggravated criminal sexual abuse -- charges he has denied.

The singer faces decades in prison if convicted of the most serious charges.

While testifying against the singer, former employees and alleged victims of sexual abuse have described in detail the control Kelly exerted over people who worked at and visited the home. Kelly, whose real name is Robert Kelly, has pleaded not guilty to all charges.

Two women testified about "Rob's Rules," protocol they said they had to follow if they were in a sexual relationship with him and staying with him at his studio or on the road: wear baggy clothes, don't make eye contact or speak with other men, and not to leave your room without permission from Kelly or one of his associates.

Defense attorney Nicole Blank Becker claimed during opening statements on August 18 that the studio's strict rules were established, in part, because Kelly lived and worked in the building. His process as an artist, Becker claimed, took longer because he is allegedly illiterate.

"Since he couldn't read or write, Mr. Kelly came up with melodies and songs in his head. His process as an artist is (a) very different process ... oftentimes he worked through the night," Becker said.

On its surface, a guest's time at the Chocolate Factory was filled with luxury -- rides in a Rolls Royce or a Mercedes Maybach and employees who could bring them food or toiletries upon request, two witnesses testified.

But to those who worked there and stayed there, the mansion was a place where every move of their lives was under tight control, witnesses testified.

Visitors to Kelly's Olympia Fields manse were greeted with imposing metal gates that, for a period, had a security booth near them. The house, set back from a main road, was surrounded by trees.

Anthony Navarro, who worked as a runner for Kelly starting in 2007 and now owns his own recording studio, described his time working at the secluded mansion as "strange."

"It was almost like the Twilight Zone when you went into the gate, like you're in this different world that was just a strange place," Navarro testified.

Workers in the house or guards at the gate would monitor incoming guests and sometimes make copies of their IDs, according to testimony from Kelly's former studio manager, Tom Arnold, on Thursday.

Defense attorney Thomas Farinella pointed out during Arnold's cross examination that the security measures were also in place to protect Kelly's wife and children, who lived in the house for some time.

Female guests and others would be asked to sign "nondisclosure agreements" upon entering, Arnold testified, and would often have Polaroids taken of them and stapled to their signed agreements. Defense attorneys argued the agreements were necessary to protect the privacy of Kelly and other recording artists who may have projects in the works.

Navarro testified that his job duties as a runner for Kelly included going on food runs to pick up meals for Kelly or his guests and answering phone lines in the reception area.

"People would call to ask for permission to move from place to place," Arnold testified.

Once a guest was inside, two former employees testified they would put them in specific rooms in the house as directed by Kelly or his associates.

Jerhonda Pace, who testified she was 16 years old when she began coming to Kelly's home and alleged that he sexually abused her, said that she spent time in a room she called the "mirror room," which had mirrors on walls and on the ceiling. Pace testified last week that she once had to wait three days in the mirror room to get permission to go to the bathroom.

"We were not able to leave out of the rooms. It was a part of the rules. Rob's rules," Pace testified on August 18.

Defense attorney Deveraux Cannick pointed out the mirror room had a bathroom attached to it.

Two former employees echoed Pace's testimony generally, saying they received calls from females who were staying at the home who asked for anything ranging from permission to go to different parts of the house to requests for food to be brought to them.

"They weren't supposed to be wandering around," Navarro testified, referring to Kelly's guests. "They had to get permission to do most things. They'd have to call either down to the studio or get ahold of Rob if they wanted anything, like food or things like that."

The former workers recalled unusual things they would see. Arnold, for example, said he saw Kelly often sleeping on a tour bus parked at the home when he wasn't on tour.

Navarro testified that he saw cameras in many rooms of the house, including in the master bedroom upstairs. Pace testified that Kelly recorded himself sexually abusing her when she was 16 years old and the singer was in his 40s.

During opening statements, Kelly's defense did not respond directly to Pace's allegations but called Pace a "self-proclaimed liar."

Employees working at the Chocolate Factory had their own set of rules to follow -- or else, Navarro and Arnold testified.

One was that male employees were not to look at or talk to female guests, witnesses testified.

When the Chocolate Factory studio began operating out of Kelly's Olympia Fields estate, Arnold testified that his job involved a lot of driving, especially bringing Kelly's personal guests to and from the studio. Arnold testified that female guests would come to the house "all the time," and that there were frequently more than one in the house at a time.

"If it was a female guest (coming) we would clear the area," Arnold testified. "That is what we were instructed to do."

Arnold also testified that he was instructed to flip up the rear view mirror on the car if he was driving one of Kelly's female guests "to avoid accidental eye contact."

Part of Arnold's job, he testified, was to frequently type up, print out and cut up slips of paper with Kelly's phone number on them -- papers that would be handed out by associates at Kelly's concerts or even when he was out going to malls or restaurants.

"As far as I remember, we always had them on hand," Arnold testified, referring to the pieces of paper with Kelly's number. "I would only give it out from the direction of Rob or someone acting on his behalf."

Both Navarro and Arnold testified that Kelly had a short fuse with employees. If rules were not followed or their jobs were not done to Kelly's liking, they would get "fined" and have their pay docked, they said.

Arnold testified that shortly before he stopped working for Kelly in 2011, he was tasked with helping ship a $30,000 painting Kelly had bought in Ethiopia on his way to the airport. The painting got lost. And a short time later, Arnold failed to secure a female tour guide for Kelly at Disney World for a last minute trip, and the singer canceled the visit after a male tour guide met him at the park. While on that trip in Florida, Arnold discovered Kelly had docked an entire week of pay -- $1,500 -- and he received a paycheck for $0.

He stopped working for Kelly soon after that.